The Process of Cover Art

I always love to know the process of how an idea for a book cover transforms into the finished product.  Here is a guest post I wrote for Cover Stories at the B&N Community Blog when Forbidden first came out.

FORBIDDEN is my debut novel, and not wanting to jinx myself, while writing it I didn’t think much of how the cover might look if it was ever published. However, after signing with my agent in June last year and then selling to Berkley Heat in the September, I knew I could finally indulge my dreams!!

The book is set during the first century AD ~

Berkley was completely awesome when it came to designing the cover. My original idea, after my editor asked for input, was for my heroine Carys to be on the cover, standing in a wooded glade beside a tree, with a waterfall in the background. I also wanted her looking toward the forest away from the “camera” so we see her face in profile. Alternatively, I suggested having both Carys and her Roman centurion hero Maximus on the cover in a similar pose. The eerie thing is when I discussed my ideas with my agent before sending them onto my editor, her vision was almost identical to mine – right down to having Maximus in his full Roman regalia!

My editor loved my ideas but suggested it might have to be a bit sexier. So I thought I would end up with a half naked guy on the cover. Now don’t get me wrong – I love half naked heroes on covers! But I had this burning desire for the cover to show exactly what the book was about – and it’s about a Roman centurion, a Druid princess and a lot of the story takes place in the forests of ancient Wales. And yes, the waterfall has great significance!

There were lots of emails flying between my agent, editor and me during the week leading up to Christmas 2009. It was hugely exciting! In the New Year my editor asked for additional input on what clothing Maximus would wear – although she added he might be bare-chested on the cover. So I sent her heaps more info on clothing and weapons.

A couple of days later she got back to me with suggestions for Carys’s gown. It wasn’t how I imagined a typical Druid gown would be – but I could immediately see the image my editor suggested would look completely fabulous on the cover. Because I like to authenticate things as far as possible I looked up the history of linen – and discovered there had been a thriving linen industry in Egypt for thousands of years, and they could produce linen so fine it was like gossamer in texture. Perfect for Carys’s gown!

When the cover dropped into my inbox, I was pretty nervous. But when I opened it up – OMG! I was overwhelmed. I even shed a few tears J. It was everything I’d dreamed of and more. Even the waterfall surpassed what I’d imagined! Within a few minutes I was on IM with my agent – she was as excited as me! Carys is as ethereal as she is in the book and even has bi-colored eyes (they show up beautifully in the enlarged version!) And as for Maximus, I think he is sooo hot. Look at those biceps!! I find the cover incredibly sexy and enticing – and it immediately gives an accurate impression of what’s inside the book. 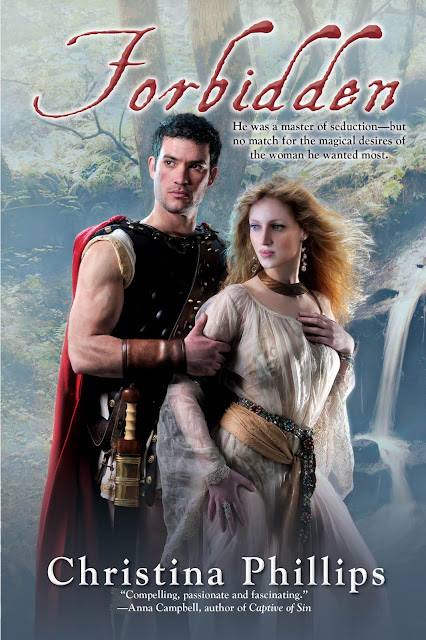