The delightful Christina Phillips has invited me to share my new release with you. I’m fairly new to the romance genre and this is my first time to have a book release labelled erotica. I always knew it was hot!
The Sorcerer’s Spell is published by HarperCollins Australia under the Impulse digital imprint. It is a sexy, body-switching urban fantasy.

Annwyn goes to bed dreaming of making love with her dead husband and wakes up in the body of another woman, a woman who is having hot sex with Dane, a powerful sorcerer. Her body has been stolen by Nira, a sorceress, who feeds her magical power through sex, the kinkier the better. The curse she laid on Dane turns him into a werewolf every full moon. To complicate matters Dane's werewolf friend Rolf, succumbs to Nira when she temporarily repossess her body, causing jealously and confusion. Time is running out, as soon Dane will be a werewolf forever unless he can break the curse. Rafael from the Collegium of Sorcerers is the only one Dane trusts to help them, but when a wider conspiracy is revealed, it's up to Annwyn and her developing magical powers to save Dane before it's too late. But can she seduce an unwilling werewolf to lure the sorceress into a final confrontation?

Here is a short excerpt where Annwyn ends up in the evil sorceress’ body for the first time.

For what seemed like a long time she floated, tumbling free with no bed, no room, no house around her. Burning in her ears, stomach heaving, and skin screaming, the sensations overwhelmed her. The only constant was those large strong hands, lifting her hips, angling them for the next thrust, hot mouth on her throat, biting without wounding.

Down, down to earth Annwyn plunged. She cried out with the force of the movement, the abrupt arrival. The crease of the sheets stuck into her back. An orange-tinged hue haloed the bed and beyond light and dark waltzed in the corner of the room.

Screwing her eyes shut, she avoided looking. There was something very wrong in what was happening to her. This was not Thomas’s body on her, in her. She jerked once, sucking in a breath. Then, opening her eyes, she screamed. Screamed like the devil.

‘What the—’ said a deep voice beside her. She heard him but kept on screaming. He disengaged from her, moved away from her yet remained on the bed. The mattress shifted beneath her as the springs adjusted to the change in weight. She screamed again.

‘Stop that,’ the man said, without a hint of sympathy. ‘You knew the consequences of your actions. You knew where this would lead. You will lift the curse now.’

He grabbed her foot. Annwyn kicked out at him, then curled her body into a ball. Through her light blonde hair, she scanned the room. The sound of paws scratching on wood drew her attention to dogs entering from further down the hall to pace around the bed. Some of them moved to huddle together in the corner. All with yellow eyes, watching her. Maybe not dogs. They were too large for dogs.

A sob escaped her, a terrified, visceral sob. Then her eyes flicked from one shadow to another. She could not look at the man sitting next to her on the bed. Her gaze leapt to the wall-sized mirror and to the image there. On a king-size bed, with pure white sheets sagging to the ground on one side, was the man, a sheen of sweat glistening between the shoulder blades and down the vee of his spine, his chest rising and falling noticeably after his exertions. Tall, with short-cut blond hair and wide shoulders tapering to a shapely behind, he sat staring at a woman with light-brown skin.

Annwyn stared at the reflection of the woman huddled near the bed head. It was her, and it was the woman in her dream— she had the same green eyes. She saw blonde hair, generous breasts and the soft flare of hips. Her skin was tawny, not pale and wan like Annwyn’s. Annwyn sat forward and so too did the reflection. She held out a shaking hand and began trembling all over. That woman in the mirror was her. When she had let the woman in, she had taken over her body and thrust Annwyn here, into the arms of this man—a man the woman was obviously desperate to escape.

The man grabbed Annwyn’s legs and pulled her toward him. Annwyn cried out, ‘No, stop!’

The man hesitated. ‘What is wrong with you? Nira? You have not broken the curse. It is still there, waiting to fall one final time. Do it now. I command it.’

Annwyn sat back from him, her arms folded, trying to rub the goose flesh from her skin. ‘Nira? I’m not Nira.’ 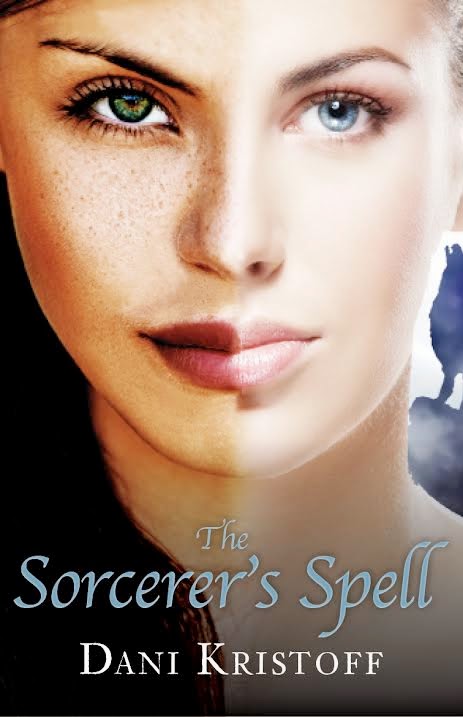 Here is the link http://www.harpercollins.com.au/books/Sorcerers-Spell-Dani-Kristoff/?isbn=9781460703199

You can find me on the web
@dani_kristoff

Facebook
Posted by Christina Phillips at 6:00 am No comments:

A Journey Through Time FB Party Heaps of #Giveaways & Fun!

On 1st August there is a fabulous Facebook party taking place with lots of amazing Historical Romance authors. There will be fun and games and lots of giveaways :-) I will be hosting between 9pm and 10 pm EST (this works out to the morning of Saturday 2nd August for those of us Down Under - 9 am Western Australia and 11 am in the Eastern States. Confused yet? I know I am!!!)

Here is the link to A Journey Through Time - would love to see you over there!!
Posted by Christina Phillips at 6:00 am No comments: