Cover Reveal! NEMESIS a Realm of Flame and Shadow novel

🧡 Cover Reveal! 🧡
Very excited to share the cover of NEMESIS (Realm of Flame and Shadow book 2) This is the Archangel Azrael and Rowan's romance, and is now up for preorder at the special sale price of $2.99 for a limited time only! 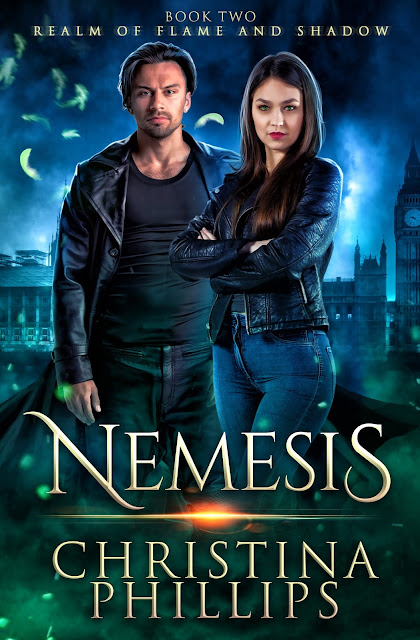 When a vampire hunter falls for an archangel out for her blood, an ancient covenant threatens to claim more than their lives…
Coming on 27th February 2020
Here's a teaser... 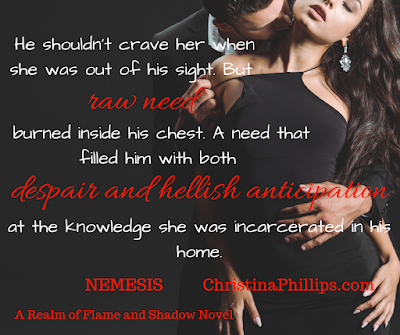 Amazon
Univ Link to your fave store
When a vampire hunter cursed by her tainted heritage falls for an archangel out for her blood, an ancient covenant threatens to claim more than their lives…
All dhampir Rowan Moreton wants is a normal life, but as an assassin of the Enclave of the Phoenix, she knows that’s impossible. Bound to the vampires who saved her from certain death and destined to die young because of her mixed heritage, love is something she can only dream of. She learned the hard way it’s too dangerous to be distracted, when her enemies lurk in every shadow. But one night with the gorgeous Azrael has her wishing things can be different. Is it possible to keep her sordid life a secret from him, without endangering him?
The archangel Azrael only cares about one thing. To hunt down the dhampir army of his sworn enemy. But when he meets the bewitching Rowan, he can’t stay away. One night is all he wants, except one night is not enough. Ensnared by the mind blowing sex, intrigued by her mysterious past, and captivated by her brilliant mind, he’s tempted to break every rule in the book to keep her by his side.
As outside forces close in on them, neither will sacrifice the other. But after a bitter betrayal, their pasts come back to haunt them, and the hunters become the hunted.
Caught in a deadly web of deception, and with time running out, they must risk everything to survive. But sometimes power isn’t everything, and the price of freedom is just too high…

Posted by Christina Phillips at 7:41 pm No comments: