The Highland Warrior Chronicles are available in AI Audiobooks!

I've been working on something exciting for the last couple of months and am finally able to share. The Highland Warrior Chronicles are now available in AI audiobooks!

Auto-narrated by Ava from Google, the audiobooks are available from:

Currently, the first book in the series, Her Savage Scot, is Free - and if you purchase the other audiobooks in the series from my store, there's a 20% discount (this discount is unavailable on the other stores).

Posted by Christina Phillips at 3:46 pm No comments:

It's release day for HER WICKED SCOT!

Her Wicked Scot is live! The fourth book in The Highland Warrior Chronicles is Ewan MacKinnon's story,  when he becomes entangled in the life of Briana, the Princess of Fotla.

A warrior rumored to have no heart. An ice princess, who has vowed never to love again. A forced marriage that could break them both… 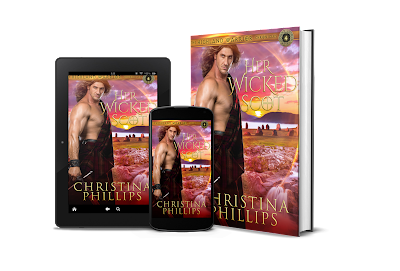 "More than just a sparkling romance, with many secrets and surprises." ragdollgirl, BookBub

"A steamy romance with unexpected twists and turns that will keep you guessing until the end!" Dee, Goodreads

"I was captivated from the first chapter, and couldn't put it down." Liza, BookBub

"Dive deep into the origins of the Kingdom of Alba, future Scotland... into an almost mythical time, when magic and reality were mixed and moved political intrigue and the people's destinies." Cristina, Goodreads

Sent into Pictland to discover the identity of a desperate assassin, Ewan MacKinnon fights his fascination with the aloof princess, Briana. Although he wants nothing more than to take her into his arms, he won’t taint her with the curse that has blighted him all his life.

After her first disastrous marriage, Briana is determined to dedicate her life in service to Pictland and her beloved goddess. But her goddess is elusive, sending only visions of a splintered future–a future that is tied irrevocably to the one man she fears could shatter her heart forever. The enemy of her people, Scots warrior Ewan MacKinnon.

Coerced into a marriage of convenience, Briana and Ewan battle both duty and desire as political intrigue tightens its noose around them. But with the assassin edging ever closer they must forsake the shackles of their past and risk their fragile love for a chance of surviving an ultimate betrayal. 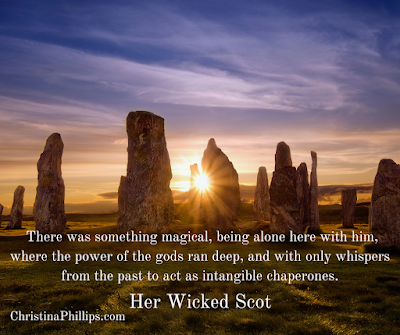 . Sign up to my newsletter to receive notification of when I run special offers!

You can also get my books for free if you request them on your library app or through your local Librarian.

My books are also enrolled in Kobo Plus.

Posted by Christina Phillips at 9:29 pm No comments:

HER SAVAGE SCOT is FREE for a limited time! 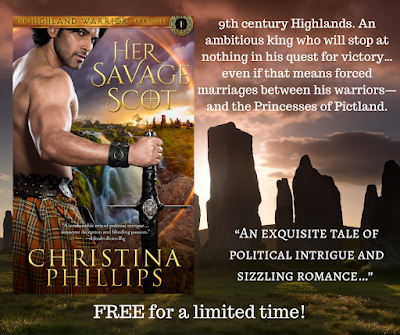 HER SAVAGE SCOT, the first book in The Highland Warrior Chronicles, is currently FREE on your favourite store! Check out Connor MacKenzie and Aila, Princess of Pictland's romance today!

When Connor MacKenzie rides into Pictland on a mission for his king, he never expects to be captivated by a beautiful Pictish widow. Drawn under her spell, yet unaware of her identity, he risks everything for one passionate night in her arms.

Aila, princess of Pictland, long ago turned her back on her goddess, and swore she would never marry again. But after meeting Connor, her frozen heart thaws and she imagines a future filled with love.

When he delivers the royal message, Aila becomes a pawn in a deadly game of politics. Her heart belongs to Connor, but she must marry the prince of Dal Riada – his half-brother. But as dangerous secrets unravel, both Connor and Aila must find a way to outwit their enemies and face the shadows of their past if they want a chance of surviving, together, in this fractured new world.

Download HER SAVAGE SCOT from your favourite store here!

Posted by Christina Phillips at 11:46 am No comments: 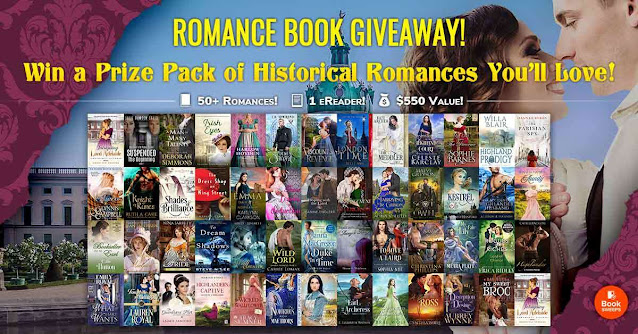 Enter this fab contest on BookSweeps today for the chance to win 50+ exciting Historical Romances from a great collection of authors... AND a brand new eReader!
Here’s the link

https://bit.ly/historical-romance-sept22
Contest ends 21st September 2022!
Posted by Christina Phillips at 11:27 am No comments:

To celebrate spring/autumn, I'm part of an amazing line up of historical authors who are all offering free books for a limited time - click on the link below to fill up your ereader!

Check out the selection of sizzling romances here!

Posted by Christina Phillips at 10:44 pm No comments:

Buy two, get one FREE!

Kobo is having a month long promo on selected romance titles, and I'm delighted that five of my historical romances have been included! If you haven't yet read any of The Druid Chronicles or The Highland Warrior Chronicles, now's the chance to pick up a bit of a bargain by clicking on the links in the titles below. 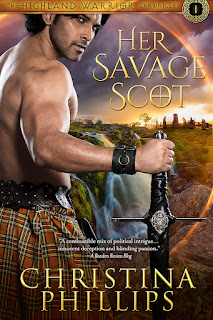 Posted by Christina Phillips at 11:00 pm No comments:

If you'd like to fill your ereader with some gorgeous historical romances, check out these amazing authors who are offering their books for free for the month of February!
Click here to check them out!

Posted by Christina Phillips at 3:22 pm No comments:

As a welcome to 2022, I've teamed up with a group of awesome historical romance authors to offer you some amazing free books. Lots of sexy Highlanders, dukes and pirates!
For a limited time only until the end of January 2022! Check out these fabulous romances here!

Posted by Christina Phillips at 10:12 am No comments:

Tavish O’Eochaid, favored son of the King of Dal Riada, has no plans to settle down until forced to by duty. But when he enters Pictland on a diplomatic mission, he’s captivated by an enigmatic noblewoman, who hides secrets in her eyes.

Bound by blood to the shadow of the royal court, Catriona cannot afford to fall for the charms of a visiting Scots warrior. As a chosen one of her goddess, she knows where her duty lies. Yet as her visions of a splintered future grow ever darker, she risks everything for a few stolen hours in his arms.

But when betrayal rocks the foundations of Pictland herself, Tavish must choose between sacrificing his honor – or surrendering to his enemy, for the woman he has grown to love.

Get your FREE copy of Her Rebel Scot

Enter your email address below to get your free copy of The Highland Warrior Chronicles prequel, Her Rebel Scot delivered to your inbox.

Your copy of Her Rebel Scot will arrive in your email inbox within the next 5 - 10 minutes.

Posted by Christina Phillips at 12:26 pm No comments:

HER BASEBORN SCOT (The Highland Warrior Chronicles Book 3) – Out Now! 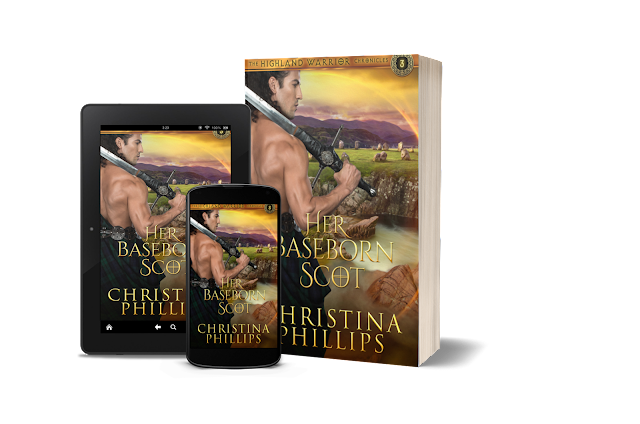 “A sizzling romance, kingdoms at war, true heroes coming into his and her own, this book has it all!” Deeanne, BookBub

“If you love historical times and places, Ms. Phillips takes you on an incredible journey!” Liza, Goodreads

A  warrior with cursed royal blood. A princess who will never submit to the enemy. A forbidden love that could cost them everything…

Tough Scots warrior Finn Braeson dreams of finding a gentle lass to love and share his life with. But when he is commanded by his king to marry the princess of Pictland he has no choice. It’s the only way to protect his mother and younger stepsisters from the king’s wrath. But before he can wed the elusive princess, he must first go undercover and find her.

Bound by a deathbed promise to her husband to never reveal her true identity as the princess of Pictland, Mairi is a fugitive in her own land. Following her beloved goddess and the omen of the Blood Moon, she’s determined to avenge her people against the upstart king, and has no intention of falling for the silken charm of any Scots warrior. Except Finn is like no other man she has ever known, and despite the danger of discovery, and the secrets she must keep, she cannot resist his allure.

Captivated by the wit of the beautiful Pictish lady who has ensnared his heart, Finn craves for a future with her. But when betrayal rocks their fragile alliance, they must fight the political intrigues that surround them and put their trust in each other – or risk being torn apart forever.

Posted by Christina Phillips at 8:31 am No comments:

The Druid Chronicles four book series
"I dare you to put down Forbidden before you reach the last page. Compelling, passionate and fascinating." Anna Campbell, Multi Award Winning Author