A Glimpse into the World of my Hot Warriors


With the release of Betrayed in only 20 days, here is a little glimpse into the world that Nimue and Tacitus live in.

This was first published at the Lovin' Me Some Romance blog in October 2010, on the release of Forbidden, book #1 in my fantasy historical romance series.

I’ve always loved history and historical romances, but because I enjoy writing about heroines who are powerful in their own right and don’t need a man in order to conform to their society’s view of propriety, it had never occurred to me to actually write a historical romance until recently.

But when Maximus stormed into my head one night and refused to leave until I discovered why he was searching for his Druid princess, a whole new world of possibilities opened up. The Romans, with their military skill and advanced technology, were literally taking over half the world. While to a certain extent they assimilated the various religious beliefs of those they conquered, when it came to the Druids they wanted nothing less than annihilation.

All we really know about the Druids from contemporary sources comes from the Romans themselves. The Druids held responsibilities for lawmaking, were the keepers of knowledge and wisdom and were known as magicians. They were widely respected as the priests of Celtic society, and the Romans feared the power they wielded over the rebellious tribes that inhabited ancient Wales. 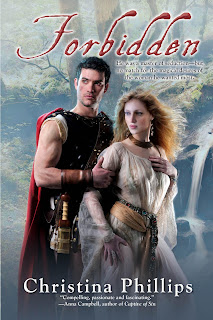 My muse was enthralled :-) Here was an entire segment of people that, despite the power and knowledge they clearly held for many generations, we know almost nothing about. Did they believe in the goddess culture?  What was their societal structure?

Their world unfolded around me. In Forbidden, the Druids do worship the goddess culture and their women are as powerful as their men. My heroine, Carys, is not only a princess by virtue of her birth but also an acolyte of the Goddess of Wisdom, Cerridwen. Carys has never been used to taking orders or believing that a man is her superior, simply because of his gender.

Since the Romans believed the opposite, there is of course that conflict between Carys and Maximus, but because of their personalities and willingness to open their minds to a culture so different from their own, it’s far from insurmountable. The greatest threats come from the Roman Emperor and his desire to wipe out all trace of Druidic culture from the face of the earth, and the High Druid of Carys’s clan who has his own agenda.

Forbidden, and the second book in the series, Captive, both have strong heroines who are struggling against all the odds to preserve their way of life so their beliefs don’t vanish into the mists of time, lost forever to future generations. Forbidden is about ancient goddesses who will do anything to ensure their names linger on in the minds of their children. And most of all, it’s about how love can conquer anything.

“The sexy elements of the book did not overpower the plot or the characterisation, but added to their love story. The real heart of the book is the emotional elements between them, and I really liked how that was played out throughout the book. Although the well written love scenes added a sensual layer of heat and passion, and *fans self*, I will never think of Roman Baths the same way again.”  Has, The Book Pushers. Full Review can be read here.