Welcome to the Lucky in Love Blog Hop!

Is love a matter of luck or is it destined in the stars? I love when heroes and heroines are fated to be with each other, no matter how the odds are stacked against them or how much they fight against their attraction towards each other. But although fate might bring them together, in the end it's up to the hero and heroine to take that chance to be with the one they've fallen in love with. I love the crossroads, where the decision has to be made. Will they step forward with the one they love? Or will they turn their back on their destiny?

BETRAYED, a fantasy historical romance, is my debut release from Ellora's Cave, coming on 20th March. Just leave a comment on my post and you'll be in the draw to win an e-copy of the book as soon as I have my author copies! Over the next couple of weeks I'll be giving away more copies of BETRAYED on my blog tour, so do pop by again! 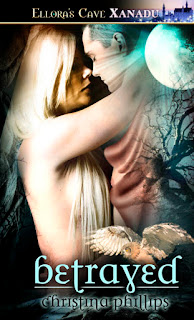 We have TWO grand prizes. You as a reader can go to EACH blog and comment with your email address and be entered to win. Yep, you can enter over 200 times!

2nd Grand Prize: A Swag Pack that contains paperbacks, ebooks, 50+ bookmarks, cover flats, magnets, pens, coffee cozies, and more!
The swag pack is for US residents  only
Don't forget to check out all the other fabulous authors, reviewers and bloggers participating in this Hop! You can find a list of them at Carrie Ann's Lucky in Love Hop
To be entered into the Grand Prize Draw and my own contest to go into the draw to win a copy of BETRAYED just leave a comment for me.  Do you celebrate St Patrick's Day? Or alternatively let me know whether you think love is a matter of chance or destined by fate?

We don't celebrate St. Patrick's Day in the Philippines --

I think love is a mix of chance and choice.

My husband and I are both born on the same day, on the same year. (He's only an hour older than me. ^_^) That's the luck aspect of it -- and the choice part was when we both agreed to share our lives with each other.

Congratulations on the release of your new book!

Never read one of your books, but it is one my list!!
Sally
sallybgraham@yahoo.com

I don't know that luck has any bearing on having a successful relationship. It's a whole lot of work. I married my high school sweetheart right out of high school. We have been married for 17 years.
planterofhope at aol dot com

Betrayed sounds like a great book and that cover is stunning!

We sort of celebrate St. Patrick's Day. This year we are going to a bit because my sister has two young-ish kids (13 and 8) and she is going to go all out one last time with a feast of green stuff and doing the "American" version of the holiday food and stuff. Just a bunch of fun silly stuff for the kids.

Thank you for the chance to enter :D
Happy St. Patrick's Day everyone :)

I love the cover and the blurb is more than interesting ( i love owl;)

thank you a lot for sharing it with us

I usually make about 20lbs of corn beef and then everyone flocks to my house to eat and hang out.

Betrayed sounds like a a captivating and sizzling read. The blurb definitely grabs my attention.

We used to do the NYC Pub hopping thing years ago. Now we just do homemade corned beef and Irish stout at home. Thank for the giveaway!

Thanks for participating in the hop.

I usually do not celebrate but this year my kids wanted to so we are having a small party with some of their friends.

I don't do anything special for St Patrick's Day except wear a St. Patrick’s Day pin and make corned beef and cabbage for dinner. Since it can take days for the smell to leave the house, we also sometimes go out and pick up a dinner of corned beef & cabbage at the local Irish pub and bring it home. (No muss, no fuss, no smell. LOL)Thanks for being part of the hop and for the chance to win. <^_^>
reneebennett35 (at) yahoo (dot) com

I think it is a bit of both.
Thanks for the chance to win!
natasha_donohoo_8 at hotmail dot com

I think luck plays a hand in helping fate with our finding that perfect person.
Thanks for the great giveaway and for joining the hop!!!!
Ashley A
ash_app(at)hotmail(dot)com

Fate needs a bit of help from lady luck to get people together. After that it's all down to how hard you work at it. Love is never a bed of roses. Unless the thorns are still there. When we love someone they are worth all the work.

We celebrate St. Patrick's day with Guinness and an Irish Breakfast :)

We don't celebrate it but it sounds so much fun! Happy St. Patrick's Day!
verusbognar (at) gmail (dot) com

I think finding someone is a matter of chance. Staying in love depends on hard work and effort!
Happy St. Patrick's Day, everyone!
catherinelee100 at gmail dot com

We don't do much celebrating for St. Patrick's day although I do try to make sure to at least wear some green. Thanks for the great giveaway!
thompsonem3 at aol dot com

It is dress in green and Corned Beef and Cabbage for me. Happy St. Patrick's Day!

I don't really celebrate St. Patty's Day... but it's my BFF's birthday so we tend to be out and about to do a combo celebration. :)

We have great corned beef and sandwiches and chill. Not big on the whole parade and hoopla. Definitely wearing green though…don’t want to get pinched…although a spanking would be a different story!
I have not yet been lucky in love, ie finding my soulmate, but hope springs eternal!
Love teh cover art!! Gonna add to my TBR list!
grapeapril75(AT)gmail(DOT)com

We don't celebrate it, I can never remember when it is and by then it's too late lol. Thank you!

I celebrate St. Patrick's Day by wearing a little green. Thanks for the giveaway.
bhometchko(at)hotmail(dot)com

We usually just celebrate it by having dinner with my grandma. This was the first year without her though so we just had dinner on sat evening with the regular family.
-Amber
goodblinknpark(AT)yahoo(DOT)com

Sometimes we celebrate - my favorite celebration was the first time I tried Guiness Stout at Bennigans! LOL

I think love is a little bit of both fate and chance :)
Thanks for the chance to win. Happy Saint Patty’s Day!

What a great giveaway hop! I have yet to be lucky in love but I'm working on it. My favorite love book is "Outlander" by Diana Gabaldon. Jamie Fraser is amazing and beautiful. I enjoy St. Patty's Day and this year I'm spending it with my best friend. We're going to two Irish Pubs and also some dance clubs. I am also wearing green and am not a fan of getting pinched. I'm not Irish either, but many people think I am because my hair is red, my eyes green and my name is Meghan, but I'm not at all. I won't be telling anybody that, however… let them believe I'm Irish.
Thanks for the giveaway!