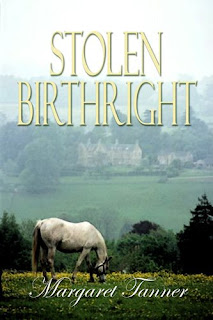 Please welcome my special guest this week, Margaret Tanner, who writes for Whiskey Creek Press and The Wild Rose Press.

Margaret's latest release in both digital and print is Stolen Birthright, published by Whiskey Creek Press

Margaret Tanner is an award winning multi-published Australian author. She loves delving into the pages of history as she carries out research for her historical romance novels, and prides herself on being historically correct.

She is married and has three grown up sons and a precious little grand daughter.

Can an English aristocrat ever hope to marry the daughter of convicts?

Georgina, a wild colonial girl, is brought up by O’Rourke, a rough and ready Irishman who she believes is her uncle. While helping the bushranger Johnny Dawson escape from prison she meets and falls in love with a dashing young English aristocrat, the Honourable Marcus Lindquist.

When Johnny Dawson is ambushed and killed, Marcus finally learns the secret of what has bound the young outlaw to Georgina. Johnny is her brother, not her lover as he had jealously supposed, but even darker secrets from the past overshadow their love.

Meanwhile, twelve thousand miles across the sea, Marcus’ Godfather, is plotting Georgina’s death to keep his dark secrets from ever seeing the light of day.

Can you tell us a little about your book?

Stolen Birthright is the sequel to Savage Utopia. It is set in Australia during the 1840’s and tells the story of the impossible love between an English Aristocrat and the daughter of convicts.

After I finished writing Savage Utopia, a story about two innocent people being transported to Australia as convicts, I wondered how this stigma would affect their children.

Well, after many years of disappointment, near misses etc. I received an email from Whiskey Creek Press, offering me a contract. I was so thrilled I didn’t sleep for a couple of days. About a week after that I received the offer of a contract from a different publisher, who unfortunately went into demise, but luckily I was picked up by The Wild Rose Press. So now I have two publishers, WCP and TWRP and 7 novels published, an 8th coming out in April 2009 and I have signed a contract for a 9th.

My favourite books are any historical romance, preferably with an Australian background.
I love the English detective/sleuth stories. Midsomer Murders, Taggert, also the CSI stories and Cold Case.

What am I working on now?

I am revising an historical romance set in Australia in the 1880’s. It is set against a background of outlaws and dark family secrets. The heroine is a girl with amnesia. It was a semi-finalist in last years Amazon Break Through Novel Award.

How can readers keep with your writing and books?

Posted by Christina Phillips at 10:15 am

Great interview! And I just love the cover of your new book, Margaret. Best of luck on your release.

I’m with Catherine the cover of Stolen Birthright is absolutely gorgeous.

Margaret I’ve read a number of your novels and found each a wonderful experience. You weave a story with a skill that is up there with the best, and the pace of your writing is able to hold me spellbound.

I’ve already decided to purchase Stolen Birthright. However I didn’t realise it was a sequel to Savage Utopia. I’ll raid the piggy bank and purchase Savage Utopia first. I don’t want to miss one word of your creative genius. ---

Margaret, Thank you providing a wonderful snapshot into the lady behind the beautiful novels. --- Keep those novels flowing I need the release.

Christina, you have a knack at finding the best people. Thank you. ------ Eric

Hi Catherine,
Thank you. Nice of you to drop by

Thanks, Eric. I love chatting with authors and I'm so glad others enjoy the interviews too!

Hi Eric,
Thank you so much for dropping by and for your wonderful words of praise. I can't tell you how much they mean to me. They truly warm my heart. I am glad you enjoyed reading my stories. Many thanks for supporting my writing endeavours.
Regards
Margaret

Hi Christina,
Thank you for inviting me to visit your blog. It is an honour and a privilege.
Regards
Margaret

Hi Margaret and Christina,
I love celebrating a writers success, especially when it is a fellow Aussie.
I love the cover of Stolen Birthright. I didn't realise you have 8 novels out. Woo Hoo! So very well done.

Great post, Margaret! Congrats on your release. I agree, the cover's wonderful - like your stories!
Best,
Cate

I had decided to mention your beautiful cover in my comment, and when I read through the other comments, I found I was not alone. It is really gorgeous. The premise sounds wonderful, too. Congratulations on your success, Margaret!

Hi Margaret. I was lucky enough to win one of your books at the RWA conference - Forbidden Love. The historical description was a real highlight. You could really feel the era in your writing. No wonder it's something you pride yourself on.
Congratulations on your new release. The cover is just beautiful.
And Christina, I have to say you really do get the most interesting authors on your blog!!

Hi, Margaret! Loved hearing all about you and your books.

Thank you so much for dropping by, I appreciate it so much. It is heartening that fellow authors, will take time out of their busy schedule to support a fellow author.
Regards
Margaret

Greetings to The Dribbler.
Nice of you to drop by. I am glad that you enjoyed "Forbidden Love." I didnt' make it to the RWA conference this year unfortunately.

Hi Margaret,
Nice to see you here and learn a bit more about you. Thanks for the plug for the Melbourne Romance Writers Guild :) LOVE your new cover - just gorgeous!! And I was interested to see your favourite shows - I LOVE Taggert too! It used to always take me half the show to get an ear for the accent, but it was worth persevering for :)

Hi Serena,
Thanks for dropping buy, Appreciate it very much.
Regards
Margaret

Hi Sexy,
Thank you for dropping by Christine's blog. My apologies for not being able to read your message, but I appreciate you taking the time to stop by.
Regards
Margaret