The lovely Tina Donahue has another scorching release this week! Check out the intriguing excerpt below from Stolen Desire and don't forget to enter Tina's contest! 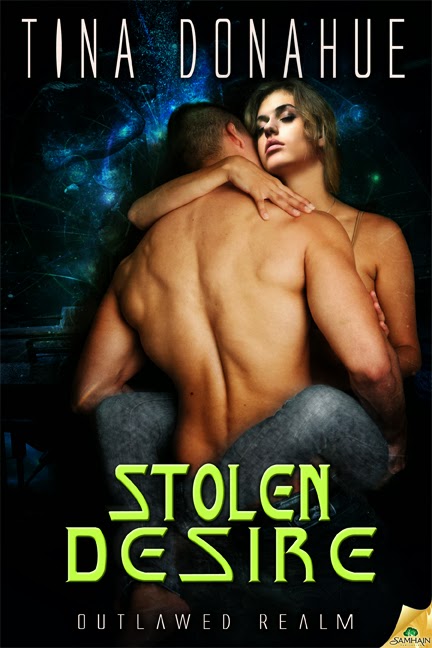 Her freedom depends on one man. A criminal to his realm…

One minute, Paige Ross is outside a Seattle bar, grieving a failed engagement. The next, she jerks awake in a weird, candlelit room with velvet walls, black silk sheets, and a man who motions for silence.

Paige has little choice but to trust the powerful stranger who promises a way out of what looks like Satan’s brothel. And pray his promise to keep her safe is as real as the heat burning in his eyes.

Banished from E2’s ruling elite for supposed crimes against the realm, Zekin risks everything to rescue those brought to E5 for the guards’ carnal pleasure. Paige will be leaving this inhospitable realm of fire and ice—if he can somehow forget the way her trembling body melts in his arms.

Safe—temporarily—in an underwater world populated by strange creatures, Paige’s sexual awakening explodes into an unquenchable need that consumes them both. But the guards will be looking for her. And Zekin’s plan to send her home is a dangerous journey she cannot—will not—take without him.

Warning: Scorching-hot sex and loads of aching tenderness between a drool-worthy hunk who’s determined to do the right thing and a woman who’s not about to give him up.

Other books in the Outlawed Realm series:

Tina will choose one commenter as her winner. Winner gets her choice of one of Tina’s award-winning, bestselling ebooks from this list:

Thanks for hosting me today!! :)

Always happy to host you, Tina :-)

Thanks for helping me celebrate. bn100 - you're my winner - I'll be contacting you shortly about your prize. :)