I'm delighted to welcome my good friend Shelley Munro to my blog today to highlight her new release from Samhain Publishing, Mistress of Merrivale. Shelley first invited me to do my very first guest post on her blog before my debut came out and I remember being both thrilled and terrified!

As part of the book tour Shelley is offering a $25 Amazon Gift Card to one lucky reader! Just fill in the rafflecopter below to be in with a chance :-) Good luck! 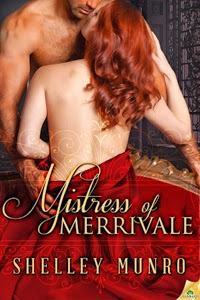 A marriage of convenience…full of inconvenient secrets.

Jocelyn Townsend’s life as a courtesan bears no resemblance to the life she envisioned in girlish dreams. But it allows her and her eccentric mother to live in relative security—until her protector marries and no longer requires her services.

Desperate to find a new benefactor, one kind enough to accept her mother’s increasingly mad flights of fancy, Jocelyn is nearly overwhelmed with uncertainty when a lifeline comes from an unexpected source.

Leo Sherbourne’s requirements for a wife are few. She must mother his young daughter, run his household, and warm his bed. All in a calm, dignified manner with a full measure of common sense. After his late wife’s histrionics and infidelity, he craves a simpler, quieter life.

As they embark on their arrangement, Leo and Jocelyn discover an attraction that heats their bedroom and a mutual admiration that warms their days. But it isn’t long before gossip regarding the fate of Leo’s first wife, and his frequent, unexplained absences, make Jocelyn wonder if the secrets of Merrivale Manor are rooted in murder…

Warning: Contains mysterious incidents, a mad mother who screeches without provocation, scheming relatives, and a captivating husband who blows scorching hot and suspiciously cold. All is not as it seems…and isn’t that delicious?

“Thank you.” Leo wanted to place his faith in her words but intended to reserve judgment. Time would tell. At least Jocelyn’s presence would stop Hannah’s constant attention. His new wife brought hope to Merrivale Manor, something he hadn’t felt for a long time. He shot her a quick glance. Lust too. The instant he’d stepped into her chamber tonight, he’d wanted to strip off her green gown and explore her luscious body. He’d badly wanted to discover if freckles, like the ones on her face, covered other parts of her torso. Even now, he fought the urge to drag her to a private spot, to ravish her until her beautiful blue eyes darkened with passion.

The waiting since their nuptials had been difficult, yet he didn’t regret the lost opportunity. She deserved time to become used to him. Her light floral scent teased him, and he sent her a grin. “I’m having trouble keeping my hands off you.”

“Oh.” She paused, the subdued lighting not hiding her expressive face. Her lips curved upward. “Good.”

A bark of laughter escaped him, and he hugged her, enjoying the way she relaxed in his embrace. “Not many women would react that way.”

“Which is why men seek out mistresses, I presume. I’d much rather you wanted me than another woman.”

“I don’t have a mistress.” Melburn had mentioned her no-nonsense nature. Leo found her practicality intriguing, and when he compared her with Ursula—
He broke off the thought abruptly, angry at himself for letting his first wife soil what should be a special evening. “I’ve no intention of taking another woman to my bed.”

“My first wife took many lovers during the course of our marriage. I didn’t like it and won’t accept disloyalty of that nature in you or myself.” Leo resumed their walk, requiring motion to rid himself of painful memories and betrayal.

“I want you to feel free to make changes in the manor. I believe there is more furniture in the attic. Mrs. Green will know.” The shift of subject wasn’t exactly adroit, but recollections of Ursula brought fury and regret for allowing his heart—lust—to rule his mind. One mistake and he was still paying. He wouldn’t make the same errors with this marriage.

Jocelyn nodded with enthusiasm, dragging his focus back to the present. “I thought I’d give the rooms themes. What do you think of cherubs for the main reception room? Maybe rename it the Greek room.”

“Cherubs?” Leo barely restrained his shudder of horror. The ones Ursula had placed in her chamber gave him nightmares. “Ah, if that’s what you’d like.”

Her throaty chuckle brought him to a halt. “I wish I could see your face more clearly. Your voice…” She trailed off, laughing without restraint.

Leo’s brows rose, and he found himself smiling at the joyful sound. “I can see I’ll have to watch you.”

With a lighter heart, he guided her past the maze.

She glanced at the opening between the hedges. “I heard there was a murder.”

“Yes.” Damn, he should’ve guessed the staff would gossip.

“I thought the maze was difficult to navigate?”

“It is. I’d rather not talk about murder. Not tonight.” The challenge of the labyrinth pointed the finger squarely at him. The local authorities had already mentioned this fact. He’d have to be careful or he’d find himself implicated again.
She heeded his strong suggestion, and they strolled in silence, the bubble of the stream and the croak of a frog providing background music. Leo guided her along the loop path and soon they found themselves back on the terrace. “I find myself longing for privacy.”

“I’ve half a mind to spank you, just to draw a line, you understand. I can’t have you teasing me about cherubs.”

“No, you’re agreeing or no to spanking?” Damn, he found he liked the coquette in her manner. A spear of lust struck his loins. He wanted her naked, under him, over him. He cast her a considering glance while wondering if she’d take his cock in her mouth.

“I’ve heard rumors of men and women who enjoy giving and receiving a spanking.” Moonlight highlighted the mischief dancing in her eyes.

“And what conclusions have you drawn regarding the reports?”

“I think I’d like you touching my bottom.” A tiny smile played on her lips, impish in nature and one he found intriguing.

The more he came to know this woman the better he liked her. It meant he could let his guard down and simply enjoy the evening instead of feeling as if he’d wandered into a Dartmoor quagmire. His strides lengthened, his pace quickening until she was trotting at his side.

“Leo! Could you slow down?” Her breath came in rushed pants, her chest rising and falling rapidly, drawing attention to the plump curves of her breasts and a cinnamon freckle that sat a scant distance above the fabric of her bodice. “You don’t want to fatigue me this early in the night.”

Shelley Munro is tall and curvaceous with blue eyes and a smile that turns masculine heads everywhere she goes. She’s a university tutor and an explorer/treasure hunter during her vacations. Skilled with weapons and combat, she is currently in talks with a producer about a television series based on her world adventures.

Posted by Christina Phillips at 1:00 pm

I would dress as a princess from our past history to get to wear a beautiful dress. Thanks for the giveaway! DamianMom at yahoo dot com

Thanks for having me to visit today, Christina!

Some of the dresses from the past would be so much fun to wear for a while. Past times seem so much for glamorous than our jeans and sweats!

It's always a pleasure having you visit my blog, Shelley!