Today I'm absolutely delighted to showcase the lovely Samantha Holt's new release, To Steal a Highlander's Heart. I adore hot warriors (now there's a surprise!) and I'm so looking forward to reading this book! To celebrate the release, Samantha is holding an awesome international giveaway. See below for the fabulous prizes and don't forget to enter the Rafflecopter giveaway!

Alana sets eyes on Morgann for the first time in several years and what does he do? He captures her! But Alana refuses to go meekly with the sexy Highland warrior. Her kidnapping will reignite the rift that’s existed between the two clans since her father accused Morgann of theft and she doesn’t want to see her father harmed in the inevitable war that will ensue.

Unfortunately for Alana, the faeries seek to interfere with her plans to escape. The sidhe have a debt to repay and Tèile, the green faery, is determined to mend the rift between the clans for good. And that means ensuring Alana and Morgann marry.

Morgann has his own reasons for taking Alana and they are nothing to do with marriage or war. He wants to use her to reveal a secret from the past, the one that had him accused of theft. If only he didn’t find his childhood friend so attractive. When circumstances force them together, Alana’s life is threatened and war is imminent. Can Morgann reveal the truth without losing Alana? And will the faeries meddling help or hinder his cause? 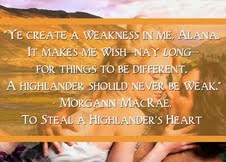 And then that hand was upon one of her breasts, comforting and teasing at the same time. He cupped her through the linen, rolled her nipple tight. He groaned against the crook of her shoulder and teeth nipped lightly at her skin.
"Ye taste so good," he murmured. "So good."
Alana arched to his touch and angled her hips into him. Hardness greeted her, his plaid gone, as an ache took hold, one that could only be ended by Morgann. The scent of damp skin teased as his wet hair brushed her cheek. He pulled away suddenly, hand still clasped over her breast, fingers remaining under her hair.
"I cannae do it." His eyes were hooded, dark with lust, voice thick and emotion filled.
Alana's heart dropped. She leaned her head back, let the air release from her chest and dropped her hands to her side.
"I cannae do it, Alana. I cannae stay away from ye. I wanted to protect ye, to be strong for ye... I dinnae think I can be strong anymore."
Relief streamed through her. He wasn't turning her down. She placed her palm over his heart, the thud strong, reassuring. "Dinnae be strong, Morgann. Just be ye. And kiss me."
He gave a groan of resignation and the hand on her breast advanced around behind her, bundled her against him. Lips moved roughly over hers, claiming, seeking. He coaxed her mouth apart and the damp heat of his tongue shocked her, forced her to grip his arms tightly. Sinuously twining with her tongue, he explored every recess of her mouth as fire built between them. The throb between her thighs became more acute, almost painful. She rocked her hips into him to get some kind of relief.
Morgann pulled her away from the wall and his hands roamed her body. The linen chemise offered little protection against his probing hands as he grasped her bottom, fingers trailing briefly between her thighs and back up. Alana kept her eyes closed as he manoeuvred her around the room, mouth firmly upon hers, until finally the edge of the table bit into the back of her thighs.
Hands gliding over the planes of his chest, she opened her eyes and reclined. She'd intended to study him, to relish the sight of firm muscles and crisp hair but to see him, so gut-wrenchingly beautiful, a vulnerable glint in his eyes, forced a surge of impatient need through her.
"Kiss me again," she begged, hooking a hand around his neck and tugging him down.
He did as she bid. His mouth moved sensuously over hers yet there was an aggression behind the kiss. A sense of him taking everything from her. But he gave back so much. His fingers pressed into her hip, massaging her flesh. She fidgeted, longing for those fingers to put an end to her agony.

Samantha resides in Warwickshire, England with her twin girls and husband. She's a romance addict and has been devouring all kinds of romance for as long as she can remember.


Having studied archaeology, Samantha likes to blend her love of the past with her passion for romance to create thrilling and passionate tales set to medieval backdrops. She thinks there's nothing sexier than a rugged warrior and a feisty maiden falling head over heels for each other.


a Rafflecopter giveaway
Posted by Christina Phillips at 6:00 am

Thank you so much for being part of this blitz

It's my pleasure! I've loved hosting you :-)