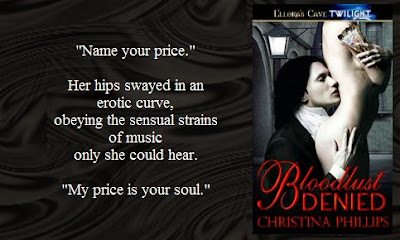 “The dangerous, addictive passion that singes the main characters is all-encompassing…”
He cupped her breast, its satisfying weight filling his hand and in the wavering light, he could see the faint tracing of veins beneath the vulnerable skin.

His lips closed over the puckered nipple, and her gasp of shock only served to increase the power of his lust. Gently he sucked on the firm flesh, when every throb of his engorged cock demanded he plunge his fangs into her. That he drink from her full, temping breast, suck her sweet blood from her, and satisfy this ravenous frenzy.

He flicked his tongue over the hard bud, and her fingers raked through his hair, pinning his head more securely to her body. Involuntarily a smile twisted and the tips of his fangs grazed his lips.

She wasn’t as indifferent to him as she tried to pretend.

With monumental effort, he forced his fangs to retract, the searing pain of denial ripping through his gums, shredding him from mouth to groin. A primeval groan of protest rasped along his throat but he increased the pressure around her nipple. Sucking, tugging, milking pleasure from her aroused flesh, from the way her fingernails gouged into his scalp.

“Harder.” Her breathless command stoked his lust, but he obeyed no man’s command, let alone a woman’s. Instead, he dragged his lips from her wet peak and heard her gasp of protest as the night’s breeze brushed against her nakedness.

Ellora’s Cave   Amazon   ARe   Booktopia    Kobo    Nook    Angus & Robertson   Amazon UK
Don't forget to check out the other fabulous authors participating in My Sexy Saturday!
Posted by Christina Phillips at 6:00 am