HER SAVAGE SCOT - We Have a Blurb!


Series Description:
Fierce sexy Scot warriors pledge to keep the peace during the turbulent times of the ninth century, when both Scot and Viking coveted Pictland for their own. But each warrior is destined to fall in love with a brave Pictish princess. The three royal cousins, determined to save their beloved land from the savage invaders, instead lose their hearts to their wild foreign warriors.


Forged in blood, United by Passion 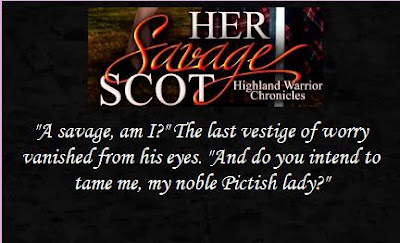 When tough Scot warrior Connor Mackenzie rides into the barbaric lands of the Picts on a mission for his king, he never expects to be captivated by a beautiful Pictish widow. Drawn under her spell, yet unaware of her true identity, he risks everything for one passionate night in her arms.

Posted by Christina Phillips at 6:00 pm

The blurb sounds great! Any idea when it'll be released? I'll keep an eye out ...

Thanks, Venetia! I'm just doing the second round edits now, so once that's been okayed by my editor it will go for line edits... and then it could be any time :-)