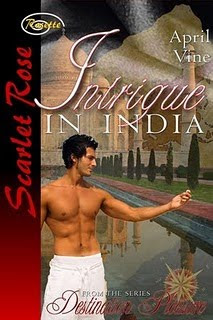 Huge congratulations to my lovely friend, April Vine, whose book Intrigue in India is out today with The Wild Rose Press!

It's part of the Destination Pleasure Series and is set in the city of Delhi. Here's the blurb:


“All you have to do is disguise yourself, pretend to be me, go to India and meet the man I’m supposed to marry. By the time he realizes you’re not me, I’ll have already eloped…”

After a break up with her boyfriend, Haley Kent agrees to her best friend, Anjali’s madcap plan, hoping mystical India will help her find inner peace. Instead Anjali’s arranged future husband turns out to be a gorgeous Indian God with a touch that scorches.

Rajeev Yuvaraj refuses to be outsmarted by the sexy, blonde, blue-eyed American and devises his own retribution. A bride is what he expected and a bride is what he would get even if it meant handcuffing Haley to his wrist during the marriage ceremony.

But when Haley discovers the true nature of his secret scheme, can Rajeev seduce her back into his arms again?
Posted by Christina Phillips at 5:28 pm

Christina! Thank you so very much for highlighting Intrigue in India. I'm feeling less a scatterbrain as the day progresses, which is a good thing :) Thanks again and totally love the new scenic blog!

LOL - I just discovered the new blogger templates! They are so easy to use I'd done it before I quite realised!!!!

Congrats, April. Sounds like a great book! Another one to add to my tbr pile, (I'm never going to get through them all the way it's growing).
Also love the new Blog, Christina.
Tam :)

Congrats on the new release, April!

Have a great weekened everyone!

Tam, I know that feeling of the ever-growing tbr pile! Glad you like the new-look blog :-)

Thanks, VFG!! I thought it was time to give my blog a bit of a facelift! Have a lovely weekend!!

Happy release day, April! I have Intrigue in India...now just to have time to read!

Love the new look of the blog, Christina! :)

I love it! And congrats to April on this sensual release!

Thanks everyone for the good wishes.
And thanks, Christina for having me!

Congrats on your new release, April.