Welcome to this week's My Sexy Saturday! This week we're all about the sexy for those characters who have survived a war or great loss, and have found love again.

This week I'm sharing 7 paragraphs from Tainted, the fourth book in my Forbidden series. Both Gawain and Antonia have suffered in the past due to war and the loss of loved ones, and neither believe they will ever fall in love. This scene is when Antonia keeps her word to meet with Gawain for an illicit liaison, a decision that will change both their lives forever :-)


Tainted and Bloodlust Denied have been nominated in the Historical Section and Twilight (Other) Section for the Ellora’s Cave Golden Ankh Awards for Favorite E-Book of the Year!
If you enjoy my books I would love your vote 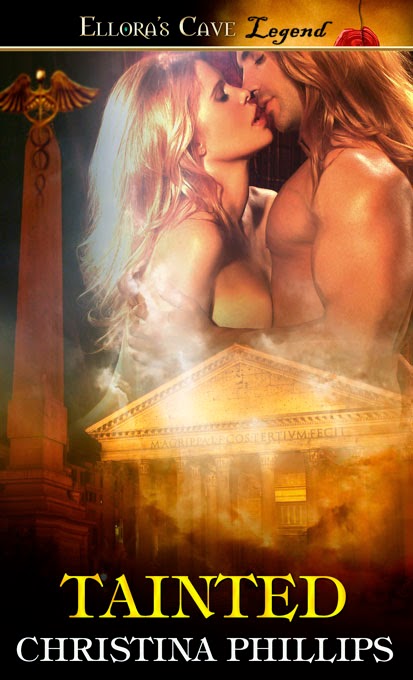 A door opened to her left and she turned to see Gawain stroll in from the bathhouse. Her heart thudded against her chest, making it hard to draw breath, and the pit of her stomach trembled with strange, liquid heat.

He looked utterly foreign, a savage warrior, and sunlight glinted on the barbaric jewelry around his throat and at his ear. He smiled, a slow, seductive smile that sent tremors through her blood and did nothing to ease the constriction in her breast.

Except for Elpis, she was alone with a strange man, a man she had virtually propositioned in the street. A native of a conquered land who made no secret of the fact he despised her people. And yet it wasn’t derision that glowed in his eyes. It was lust.

“Lady Antonia.” His smoky voice wrapped around her senses, as potent as though he had wrapped his arms around her naked body. “You kept your word.”

“Did you doubt I would?” She scarcely recognized her voice. She sounded like a sultry seductress. Perhaps, after all, Gawain would never guess what a novice she was when it came to playing such dangerous games.

He stopped in front of her, so close that the amber flecks in his dark eyes mesmerized her. “No.” The word sank into her blood, igniting sparks of pleasure that skittered across her exposed flesh. “You want this as much as I do.”

Hop over and check out the rest of the authors participating in My Sexy Saturday this week!
Posted by Christina Phillips at 6:00 am