A Stolen Season by Tamara Gill

Huge congratulations to fellow Historical Hearts author, Tamara Gill, on the release of her time-travel romance, A Stolen Season from Crimson Romance! I've been lucky enough to read an advance copy of this sexy Regency romance and I couldn't put it down! 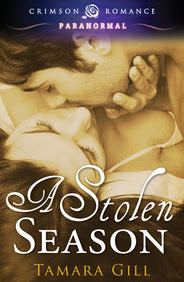 Archaeologist Sarah Baxter had a clear directive: travel back to nineteenth century London to retrieve the measuring device she left behind. But her bungled attempt at thievery left an English Earl dead and his brother bent on revenge. Sarah must once again go back in time to find the device and return to her own time before their tragic mistake puts a noose around her neck. Unfortunately, the only way to get close to the device is to befriend the very man who wants her dead.

Eric the new Earl of Earnston was determined to catch the woman who killed his brother, but she’d disappeared without a trace. Twelve months on and there are still no clues to her whereabouts. As luck would have it, he finds a distraction. A new family have arrived in town and Miss Sarah Baxter is a delightful diversion among the stale debutantes in the ton.

Sarah knows it is madness to seduce the man who would want her dead should he know who she was, but the Earl is an alarmingly persistent gentleman. Can Sarah procure the device without her secret being revealed? And what will the Earl do when he finds out the woman he’s in love with is not the woman he thought he knew.

Now available from Crimson Romance
Posted by Christina Phillips at 6:00 am

Awww, thank you so much for the shout out and kind words, Christina!! Don't know if I've told you this before but you ROCK!!!
XXXXXX

It's my absolute pleasure, Tam! Loved this book, as you know :-) Sorry I couldn't reply before, had no internet access for two days!!