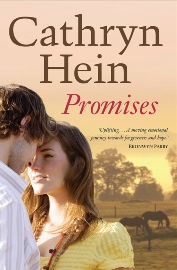 Huge congratulations to my good friend Cathryn Hein, whose debut with Penguin Australia hits the shelves today! Isn't that a beautiful cover? I've known Cathryn for a few years but we only met for real at the RWA conference last year. Fingers crossed we'll get to meet up again next year!

And here's the enticing blurb:


A father with something to hide, a jockey with a taste for blackmail, a man with an agonising secret... and a young woman in love, defying them all.
Sophie Dixon is determined to leave her tragic past behind and forge a bright future on her beloved farm. While looking to buy a new horse, she is drawn into her neighbour Aaron Laidlaw’s orbit, despite the bad blood between their families. As the racing season unfolds, Sophie and Aaron’s feelings for each other deepen. But Aaron is torn, haunted by a dark secret he fears can never be forgiven – especially by Sophie.
Sophie believes herself strong, but the truth behind her mother’s death will test her strength, and her love, to the limit. She’s been broken once. No one wants to see her broken again. Least of all the man who has grown to love her.
Posted by Christina Phillips at 11:05 am

My apologies for the delayed comment but thank you, Christina. You're a darling!

And thanks to you too, Mel. Last week was a blast.

i just finished reading promises and LOVED IT.

Just finished reading Promises could not put it down, hope there is another edition to this.