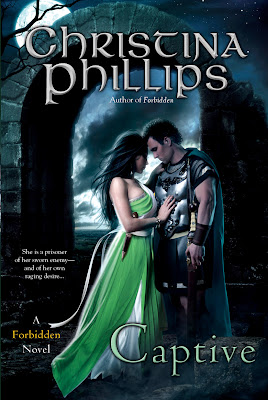 Today is Captive's official release date! It still feels a little unreal but I'm so excited that Bren and Morwyn's story is finally out there. I hope readers love Bren as much as I do :-)

If you see Captive on the shelf, I would love if you could take a photo and let me know!! It's not on the shelves here in Australia - yet - although I'm thrilled both Forbidden and Captive are being released by Penguin Australia on 2nd May *yay*!

I have a blog tour during February where I'll be giving away copies of either Forbidden or Captive - I'll post details here on my blog with links. Be sure to pop back to find out where I am!!!

She is a prisoner of her sworn enemy - and her own desire...

Having lost her faith when Roman invaders destroyed life as she knew it, Morwyn took a vow of celibacy to spite her goddess. But before she can join up with the rebels, she's captured by a Gaul mercenary whose animal charms and chiseled body will test her conviction... and make it harder to kill him.

Bren, pledged to the true Briton king, has spent three years undercover in the Roman Legion. So when his own unit attacks and brutalizes a fiery Celtic beauty, he saves her the only way he can - by claiming her as his prisoner. But unlike his men, Bren would never take the woman by force, no matter how obviously she burns for his touch.

As they near Roman headquarters, Morwyn resolves to honor her vow of celibacy - but if the Gaul were to ravage her, could she be blamed for enjoying his body? With just a hint of seduction, sooner or later the Gaul will succumb to his exquisite captive...

Posted by Christina Phillips at 10:33 pm

Congrats Christina!! How exiting! It will be just as exciting when Forbidden and Captive get on the shelves where you live too.

Oh CONGRATS Christina!!!
And where does the time go???

Doing the happy dance for you. Congrats!

Woohoo Christina. Congrats on the release of your second baby. Hope it sells its socks off.

Thanks so much for all your congratulations, ladies!

Kaye, it will be unreal to actually see my books on the shelves of my local stores!

Happy release day to my lovely CP! I'm so excited that the world is going to read your new book!!!!!

Happy Release Day to you.

I hope you celebrated today. I can't wait to read it!

Thanks so much, Bron and Vanessa!

Many, many congratulations, Christina. What an exciting day for you!

I hope you celebrated in style.

Thanks for the congrats and good wishes, Cathryn and practimom!