It's been a while since I've done a Delicious! So here are another couple of debut books I read earlier this year and thoroughly enjoyed.

First up is Erica Hayes's Shadowfae, the first book in her Shadowfae Chronicles. 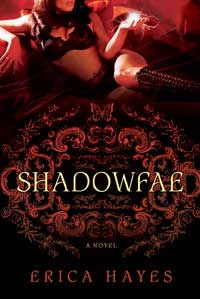 Imagine a secret world veiled in fairy glamour and brimming with unearthly delights. A city swarming with half-mad fairies, where thieving spriggans rob you blind, beautiful banshees mesmerize you with their song, and big green trolls bust heads at nightclubs. And once you’re in, there’s no escape…

Enslaved by a demon lord, Jade is forced to spend her nights seducing vampire gangsters and shapeshifting thugs. After two hundred years as a succubus, she burns for freedom and longs to escape her brutal life as a trophy girl for hell’s minions. Then she meets Rajah, an incubus who touches her heart and intoxicates her senses. Rajah shares the same bleak fate as she, and yearns just as desperately for freedom. But the only way for Jade to break her bonds is to betray Rajah—and doom the only man she’s ever loved to a lifetime in hell.

This book is blazing h-o-t! With fairies as you've never seen them before (roll over Tinkerbell!) and a heroine who has no choice but to have sex with whoever her demon lord demands (yes Kane, I'm looking at you!) I was hooked. And cheering Jade on to reach her very own HEA... and you'll have to read the book to discover how she achieves that!!! 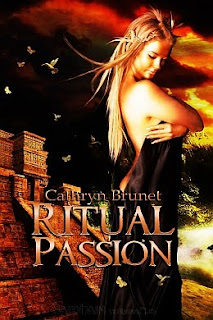 A passion to appease the gods…or call down their vengeance.

The jungle-wrapped city of Challas is dying, crumbling under the weight of its corrupt priesthood and degenerate new gods. But an even greater threat looms on the horizon. Outside the city walls, a pestilence breeds. Unless stopped, it will crawl through the city’s decaying streets and destroy everyone.

Phalandria wants to see her magnificent city reborn and freed from the perversion of the priests who murdered her father. And she wants Massilis, the man who has stood by her side since childhood. The man who’s developed into a magnificent, jungle-hardened warrior…and ignites her unquenchable desire. Although Massilis has always protected her, only once has he allowed his hunger for her to show.

Now the water oracle has called for Phalandria and Massilis to perform the Concubitia, a sexual rite to propitiate the gods. But the priests suspect a conspiracy and will do anything to protect themselves. And Phalandria realizes that the priests are not the only ones sabotaging the ritual.

The man she loves has an agenda of his own.

Great books, Christina! Wonderful reads too. You are the best for featuring Delicious Debuts.

ooh, they do sound delicious. Thanks, Christina.

Oh, they both sound scrumptious!

Oh, you're a darling, Christina!

Thanks so much for your wonderful comments on Ritual Passion. I'm grinning like a loon right now!

Forgot to add that Shadowfae is on my to-be-read list as well. Sounds right up my alley!