Very slowly working my way through my tbr piles - only problem is I keep adding to them so I'm not exactly making any headway!!! Anyway I've read a couple of fantastic books over the last couple of weeks, so I'm showcasing them here! 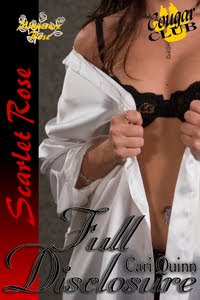 Thirty-eight-year-old divorcee Holly Burrows has had enough of battery-operated love. Prompted by an ad left at her law office, she investigates Hunk Du Jour, a website designed to foster ‘adult connections’. After weeks of sexy emails and phone calls with surf hunk Kent, she's ready to test their chemistry in person. But first she has to get through lunch with her colleague Alex, a man with a brain as agile as his body. When their consultation ends with a bang, she barely remembers the man she'd lined up for dessert. Now she thinks she's juggling two hot young guys. How can she choose between her two gorgeous cubs – and why do they remind her of each other? 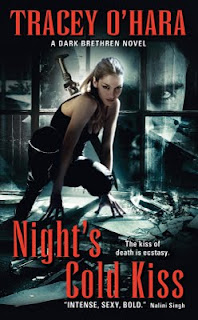 For centuries war raged between the humans and Aeternus vampires—until courageous efforts on both sides forged a fragile peace.

But the rogue Necrodreniacs will never be controlled—addicted as they are to the death-high . . . and bloody chaos.

Since witnessing the murder of her mother, Antoinette Petrescu has burned with fiery hatred for the vampire race—even for Christian Laroque, the noble, dangerously handsome Aeternus who rescued her. Now an elite Venator, Antoinette must reluctantly accept Christian's help to achieve her vengeance—even as he plots to use the beautiful, unsuspecting warrior as bait to draw out the bloodthirsty dreniacs.

Night's Cold Kiss is the first book in the Dark Brethren series and I am hooked. Dark and powerful, I love the way Tracey pulls no punches . As an added bonus Tracey's just uploaded a prequel onto her website - Dante Rising - that shows the scene where Antoinette watches her mother's brutal murder. Chilling!
Posted by Christina Phillips at 7:12 pm

Thanks for the recommendations. I just picked up my copy of FULL DISCLOSURE.

Thanks so much for reading Full Disclosure, Christina! I'm so pleased you enjoyed it. I'm finishing up Jenny's story - she's the webmistress at Hunk Du Jour - and then Haley's story is next on my agenda. ;)

Thanks also to Emma for picking up FD!

Oh, and I forgot to say Night's Cold Kiss sounds wonderful! I'll definitely be adding it to my TBR.

Ooh yay for Jenny's story! Sorry, Cari, for some reason I thought Haley's story was next up!

Thanks for sharing the stories, Christina.

Glad you are working on more stories, Cari!

Thanks for the recomendations Christina. My tbr pile is down to one, so I'm going to buy these and read over Christmas. :)

Sigh - I have so many books on my to-buy list at the moment. My credit card is whimpering at the thought. So is hubby!

Have read Night's Cold Kiss and it's fantastic.

Have placed Full Disclosure on the To Check Out pile.