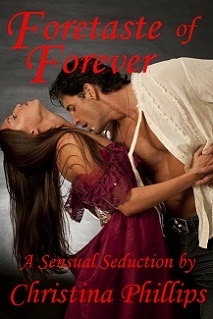 
Powerful witch Elyesha finally finds the only man she’s ever loved, the man who deserted her countless years before. But Ben is torn between desire and despair when Elyesha, his only love, discovers his retreat. He abandoned her to save her but how can he resist her seductive embrace when she offers him everything his shattered soul craves?
He knows what she wants. But the price is too high. He’ll take what she offers for one last night – but as their erotic encounter unfolds so too does the devastating truth.
Excerpt     Reviews
Previously published by The Wild Rose Press in 2008
Available from Smashwords  Kindle
Don't forget to check out the other Halloween treats for this week's My Sexy Saturday!
Posted by Christina Phillips at 10:49 am

Great snippet and a wonderful story.

Thank you, PJ Dean and Tina!