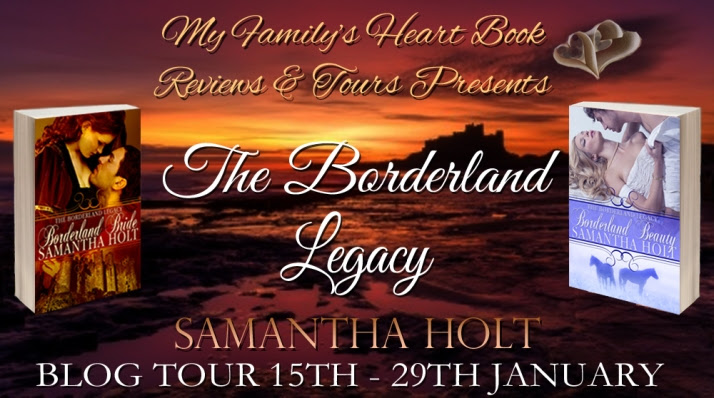 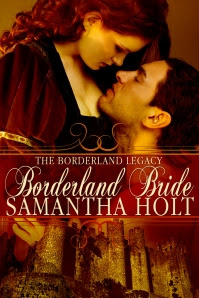 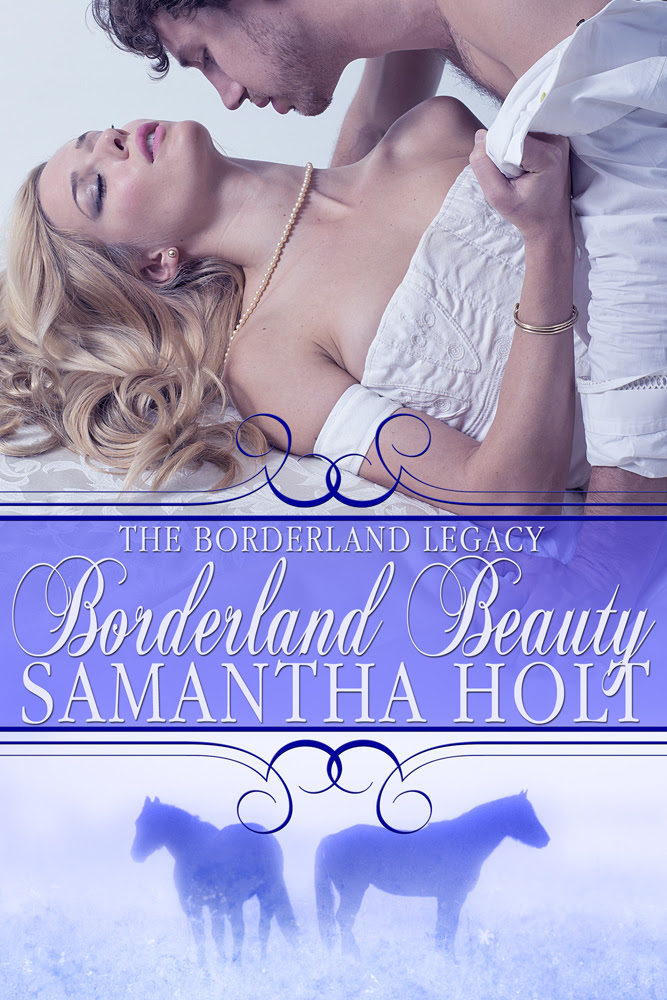 In the wilderness of 14th century Northumbria, Lady Isabel discovers just how dangerous the Borderlands can be. With the loss of her voice and her hearing, there is little hope left for her. But when a brooding knight rescues her, she vows never to become a victim again and buries the secrets of her past in the hope that those hunting her will never find her in the Borderlands.

Jake is astonished to come across the beautiful Isabel, near to death, on his brother’s lands. Bringing her back to his brother’s home, he finds himself longing for something more from the courageous woman, something that he thought he would never want again. Isabel works her way into his scarred heart and opens Jake up to loving once more. But will Isabel’s secrets destroy their bond? And with his charismatic brother, Dominic, charming her, does he even stand a chance?

Lord Dominic is in need of a wife. With the reivers, the wild and dangerous criminals that haunt the borderlands, breathing down his neck and his brother now married, he needs a strong woman by his side. So when he finds out about an old marriage contract between him and his neighbour’s daughter, he vows to give the mysterious woman a chance. Upon meeting the beautiful, feisty maiden, he vows to make her his wife.

Lucy Montgomery wants nothing to do with the arrogant lord. She doesn’t understand his interest in her. Surely a man like Dominic could never fall for a woman like her? Hurt by the past, she refuses to believe that she is anything more than a game to him. If only she didn’t find him quite so charming.

Can Dominic persuade Lucy that she is more than just another woman to him? And with the reivers growing bolder, are there worse dangers than Lucy saying ‘Nay’?

“Isabel, what in God’s name are you doing?”
“I am returning to my father,” she told him breathlessly.
“You would see yourself in that monster’s hands? Why?”
“I cannot see Thornewall suffer for my sakes. And I cannot see you or Dominic harmed. Not for me.”
“We are grown men; will you not let us make these decisions ourselves? Thornewall is strong, we have endured worse.”
Isabel shook her head. “Nay, I will not see war brought to your door. If my father fails here, then he will turn his attention to your lands. They have not the strength of Thornewall, you have said as much yourself.”
Jake squeezed her arm until he saw her wince. Damn his brutish manners. He could not let her throw herself into the arms of a murderer for their sakes. “I can defend my lands, lass. I’ve done it before and I’ll gladly do it again.”
But she was right, Greycroft was ill prepared for a full-scale war and his own castle would not hold out long against a siege. It was likely he would die defending it.
“That is what I fear,” she said softly and Jake wondered if he had spoken aloud.
Her voice took on a desperate quality and she pulled against his grip. “Let me go, Jake, for I cannot allow you to place yourself in danger for me. Not for a woman that hurt you so.”
He considered her and saw the fear in her eyes - a fear that was not for herself, but for him, his brother, and all their people. How he could ever have thought her as wicked as his wife, he knew not. There was nothing in this lass but kindness. He gulped, fighting the words he would have to say. There was no other way.
“Isabel, you do not have to return.”
“I do, Jake!” She struggled again.
“Listen…” He grabbed at her other arm and pinned her still. “Listen, there is another way. Marry…”
She ceased her struggles and stared at him.
“Marry Dominic.”
Isabel blinked at him. “What?” she whispered.
“Marry Dominic. Your father would be a fool to say nay to such an allegiance. He is one of the richest men in England. There will be no war and you will be safe.”
Safe. He clung to the word, trying to ignore the ache in his heart. It didn’t matter, as long as she was safe. In spite of himself, he urged her to say nay, to confess her love for him, but he knew it could come to nothing. He had nothing to offer Lord Henry in return for her hand.
Isabel gaped at him. “Marry Dominic? But…did he decide this?”
“Nay.” He sighed. “‘Twas my idea.”
She gulped and her eyes misted with tears as she took a deep breath. Her composure regained, she shook her head in disbelief. “Why would you suggest such an idea?”

Holding out his hand, his dipped his head and eyed her from under his brow. “Will you dance with me, Lucy?”
She hesitated, glancing around as the couples took their positions. “I know not this dance.” In truth, she knew few dances, having avoided them for most of her life.
“I will teach you.”
Dominic snatched her hand and led her to the centre of the floor. Her heart slammed into her chest at the touch of his fingers. Why did his touch always incite such a reaction? Glancing around, she realised she could hardly tear herself away from him. Many were watching them. Especially the women.
“Stand there,” he ordered as he stepped back.
Her eyes darted from Dominic to the other dancers who moved confidently around them. He motioned for her to step forward and she did so, bringing herself closer to him. The dancers circled one another and Lucy mimicked them. His sapphire eyes remained on her, bright and alert and her skin tingled under his scrutiny. Why watch her so closely?
“Now step back,” he murmured.
She did as he bid, stepping back a little later than the other dancers. Her cheeks filled with heat but she could not tell it if was because of his examination of her or her lack of dancing ability. His eyes continued to follow her avidly and she dropped her gaze. Nay, it was Dominic who was the cause of her blush.
The dancers lined up and Lucy stumbled back, her eyes narrowing as Dominic’s crinkled in amusement. A lord and lady wove between them, working their way up the line. The lady’s hand brushed across Dominic’s chest as she passed, a flirtatious smile on her lips, and Lucy clenched her teeth together. He flicked a disinterested look at the woman before securing his gaze back onto hers.
Lucy and Dominic did the same, weaving through the other dancers until they reached the end of the line. Keeping her spine stiff, she resisted the urge to peek at him as she did so, but as they faced each other one more, his blue eyes caught hers and she could do little else but stare back.
Lord, she was getting lost in those penetrating eyes.
Stepping forward hastily, her eyes widened as his hands came about her waist. He lifted her easily and her heart came into her throat. The ladies around her squealed in delight as they too were lifted and then placed down, but surprise had struck her dumb.
“Move back,” he commanded quietly, his eyes darkening.
She faltered as she retreated, her pulse beating erratically. His look of desire confused her and she pulled her chin up. She would not be toyed with like this. It was time to wrest back some control.
They repeated the first movements and Lucy stepped confidently now. “I hear tell that you are searching for a wife,” she stated archly.
Dominic barely blinked. “Aye, ‘tis true. Why? Are you interested?”
“Hardly.” She released an unsteady laugh. “I thought you were to be married to Lady Isabel of…of Greycroft.”
“I was.” He circled her, appraising her openly as he did so.
She followed him with her gaze, hoping he could not see through her bold look. “But it seems she married your brother.”
“That she did.”
“Are you not angry? Did she not wound your ego?”
He shook his head with a shrug. “Nay. Jake loves his wife very much, why would I begrudge him that?”
“You did not love her?”
“I love Isabel as a sister. She is a fine woman but she is better suited to my brother. I do not regret that she is not my wife.”
“She probably does not regret it either,” she said with the raise of an eyebrow.
They wove their way in and out of the line and they waited as the other dancers took their place.
“Isabel did not suit me, but a woman like you…you would suit me very much.”
“Ha, you think me foolish enough to fall for such talk? I have heard much of your reputation, Dominic of Thornewall. You would promise marriage just for the chance of a tumble. I would not give up my virtue to such a man.”
His hands came upon her waist. “That sounds like a challenge,” he said before lifting her effortlessly.
He placed her down and Lucy gaped at him, speechless. The people around them clapped as the music ceased but Lucy paid little attention. Raw desire glinted in his expression and her stomach twisted. Surely that look was not for her? He was teasing her, playing with her, luring her in so he could strike her down.
She curled her fists and clamped her mouth shut as she swivelled on her heel. She would not let him make a fool of her again.

Samantha lives in a small village in England with her gorgeous twin girls and husband who is a trained bodyguard and ex-soldier (Yes, seriously!). She traditionally writes historical romances involving chivalrous knights and hot highlanders, but occasionally dabbles in contemporary romance. When she reluctantly leaves her computer, she enjoys exploring old ruins and indulging an early midlife crisis. Adrenaline filled suggestions for the bucket list are always welcome!


CLICK HERE TO ENTER SAMANTHA'S AMAZING GIVEAWAY
Posted by Christina Phillips at 6:00 am

Thank you so much for being part of the tour - TONYA