Today I'm so happy to showcase fellow Ellora's Cave author Mel Tescho's latest sizzling release, Enraptured! My goodness, look at that sultry cover :-) Mel and I have been online buddies for years, and finally met three years ago at the RWAus conference in Sydney (was it really that long ago!) 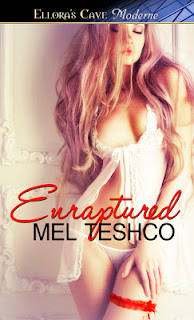 Kate grew up knowing how badly bullying could batter self esteem. That was why she never imagined herself as beautiful and sophisticated, Brandy, high-class call girl.

She loves sex, loves her job that gives her self-assurance, financial security. Being on the arms and in the beds of the most influential and powerful men in Australia doesn’t hurt, either.

When billionaire philanthropist Blaine starts taking more than a professional interest in her—both in and out of bed-- Kate has to decide whether to run, or stay and risk it all for the man she not only lusts after, but loves.

Galactic Inferno
Ally Grayson believes she’s the last person on Earth after aliens arrived, bringing with them a deadly virus that wiped out most of mankind.
Somehow surviving the annihilation, she hides in a Sydney house with her dog, Bonnie. She knows she has to leave before the “eyes in the sky” detect her and have her captured, but she never expects an alien to save her and Bonnie from the jaws of a ravenous, feral dog. Never expects to be drawn to Renate, the alien male who seems more human than any man she’s ever known.
She fights an attraction she can’t win, and soon enough she’s in his arms, under his hard, amazing body. Except their unearthly desire might not be enough to keep them together when Renate’s alien comrades close in.
Galactic Burn
Humans have been almost wiped out. All the males are gone and only a few hundred females worldwide survived the devastation. The same deadly virus annihilated the female population of a mighty alien nation, and their three kings—Dar, Ezra and Maddox—are looking for one special female, Lillian, to capture and seduce.

Though Lillian survived, she has no memory and struggles with the fact that three alien men have become her lovers. One by one, they take her, make her burn for release and satisfy her every sexual need. She craves their touches, their kisses, their comforting embraces while forming strong emotional bonds with each. Lillian is falling for her sexy aliens and agrees to become their life mate in a special ceremony—her three males will make love to Lillian as all the surviving alien males watch.

But, as the ceremony nears, Lillian begins to remember. The aliens lied and covered up the horrible truth. Their happy, new life together might not be possible after all.
Galactic Flame

Eden isn’t meant to be the alien prince’s life mate; it’s her sister who’s been promised to him. But when Genesis comes to Earth and mistakenly believes Eden is his mate, she knows it’s the perfect opportunity to play the role her sister never wanted. And when she steps into the magnificent alien’s arms, and is taught unimaginable carnal pleasure, Eden knows she’s filched a priceless prize indeed.

We've both been so lucky with our covers *smiles*

We certainly have, Mel! We must have been very good to the cover gods in a previous existence :-)