I'm delighted to showcase fellow Historical Hearts author Allison Butler onto my blog today with her debut release from Destiny Romance, The Border Laird's Bride. I met Allison at the RWA conference at the Gold Coast last year and am looking forward to catching up with her again in August :-)

Allison writes gorgeous medieval romance about sword-wielding, swaggering men and the daring, determined women who capture their hearts.She is also married to her very own Scottish hero!!! 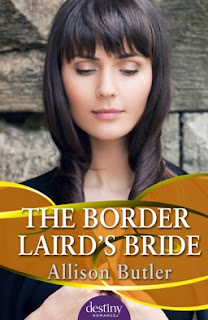 Publisher - Destiny Romance - Published February 2013
Blurb - To fulfil his father's dying wish, border laird Jamie Graham must marry and sire a legitimate heir. But his marriage will be one of convenience, for he has vowed never to open his heart for betrayal. While guarding his cattle from thieves, Jamie catches the spirited daughter of a neighbouring laird stealing his horse.

Despite viewing an arranged marriage as a death sentence, feisty Kenzie Irvine has no choice but to wed the domineering laird. But she has sworn an oath never to bring a child into an uncaring world ...

Excerpt - The air shifted and the fine hairs on her nape stood on end as Jamie moved close behind her. She resumed petting the long, brown nose under her fingertips, reminding herself she wasn’t here for the joy of visiting the horses alone. She was here to salve her guilty conscience for misjudging Jamie regarding Davina. She was here to discover more about the man she’d married.

His voice broke into her thoughts. ‘You’re fond of horses?’

Her fingers paused. ‘Aye,’ she said with a final stroke before reaching for the next. ‘They have the prettiest eyes, don’t you think?’ The pads of her fingers skimmed the short, coarse hair on the nose pushing into her hand.

Jamie replied by clearing his throat.

‘As long as they are fed and watered, they never complain, despite all the hard work they do.’ She made her way along the barrier, careful not to miss gliding her hand down every nose thrust over the enclosure. ‘They always welcome you as if they’ve missed you, and they never ignore you.’

Silence reigned for several heartbeats and Kenzie feared she’d said too much.

‘Ailsa said you liked to chatter.’

‘Did she?’ Turning, Kenzie looked up into his handsome face. ‘Ailsa has always been a special friend to me. Having her here is a great comfort.’ She peered into the darkness for a moment then looked back at him. ‘But I think you knew she would be. Thank you for bringing her.’

Light from the lantern he carried tinted his hair and cinnamon lashes gold.

‘So you know she wasn’t dragged here to force you to marry me?’

She’d just admitted as much hadn’t she? ‘Aye.’ She lowered her gaze to hide her annoyance at having to say it, but also to conceal her shame for assuming otherwise.

Warm fingers cupped her chin. A quick breath rushed in at his touch. He tilted her face up.

'Dare not think I wouldn't have used your friend to gain your consent, Kenzie.'

The shadows were too deep to see his eyes, but his firm yet careful grasp spoke loud and clear.

‘I do not believe you, Jamie Graham.’ Stepping away, she broke his gentle hold and pretended to concentrate on the remaining horses.

Teeming rain filled the thickening silence. Jamie crowded her against the stall wall, touching her with naught but his masculine heat. ‘You doubt my determination?’

Low, close, his warm breath tickled her ear. She closed her eyes until the tremor rippling through her had passed. ‘Nae, I simply question your methods.’ Pleased she sounded unaffected by his nearness, she stroked the last horse in line.

‘My methods?’ A hint of frustration fractured his deep voice.

Did she frustrate him? It was only fair considering how easily he muddled her thinking and her beliefs.

‘Aye,’ she said, strolling on to pause in front of a wide, empty stall. ‘Why are there no horses here?’

‘'Tis best to keep an empty stall between my mount and the others. De Brus can be surly at times.’

‘Like his master?’ Kenzie glanced at him over her shoulder and saw him frown at being compared to his mount. She quickly turned back before the smile she fought to hide broke free.

‘Never mind the horses. I believe we were discussing my methods.’

‘Oh, aye,’ she said, moving to the last enclosure. He followed close at her heels. ‘Your honour far outweighs your determination.'

'What in God's name are you talking about?' Frustration rang in his voice.

Knowing she could throw Jamie off balance with a few words restored her sense of control, something she sadly lacked in his presence. She owed him nothing, yet the need to explain had her turning into the light.

'Even if Ailsa were your last means of gaining my consent, you would never have harmed her. You would have found another way. I know that now.

She turned, reached for the latch and entered the stall.

'Two days and you think you know me so well?'

Light pushed the shadows back as he followed her inside. De Brus wandered toward her.

‘Nae. But I have watched and listened and learned much about you.’ She slowly lifted her hand to scratch De Brus’s nose. And about myself.

‘You called me a beast and now you think me a saint?’

Her lips twitched. ‘I would not go so far as to believe you a saint, but there is much kindness in you.’

'Kindness?' Exasperation coloured his tone. 'I threaten you with a noose about your neck and you think me kind?'

She'd been angry. Furious. But ... 'I did steal your horse.' She stroked his mount's neck, wondering why she offered reasons for his actions when she should be condemning him. 'And I know about Davina.'

Squeezing her eyes shut, she wished her words to perdition. She didn’t want to admit she’d been wrong, hated the shards of guilt swirling inside her, pricking her chest. Loathed knowing she'd turned his act of kindness into something sordid because she'd been - jealous?

She opened her eyes to find the shadows had moved in again. ‘I thought -’ Words stuck in her throat. She swallowed and started again. ‘She told me about your promise to dance with her the day you married.’

'I had no idea she was lame. I saw you dancing with a beautiful woman and thought - but then I learned you'd made a promise to a weeping young girl years past and kept it. Many would have forgotten. Oh, but not you.’ She shook her head. ‘It is truly annoying to discover you are not the man I expected you to be.’

Why hadn't he beaten her when she'd escaped, or bedded Davina, giving her reasons to despise him?

Large hands grasped her shoulders and turned her about.

She frowned. ‘You speak as if being kind is an insult.’

‘There are many ways I want you to see me.’ He leaned closer. ‘Being kind isn’t at the top of my list.’

She fought to draw a full breath, settled for small gasps of air. Her heart raced. ‘Kindness is a worthy quality -’

'I brought you to the stable to seduce you.'

Her heart jumped about in her chest. Heat pooled in her belly. If he was trying to frighten her, it wasn’t working. He’d stated his intentions. She should push him away. Remind him she wanted no part in this marriage. Remind him she planned to have it annulled. She licked her dry lips and whispered, ‘Yet you have barely laid a hand on me.’

A shudder trembled through his hands into her. He released her shoulders and speared fingers into her hair, cupping her face. His head lowered. His breath brushed her lips.

‘God flay me alive for being remiss.’

Thanks so much for having me, Christina:)

It's been my pleasure, Allison!

"If all novels in this genre could be written in such a way then I would definitely read more of them.  Full marks to the author for writing such a pleasing piece." - Sue's Reviewing Corner

"I absolutely loved it. I couldn’t put it down!" - Author Unpublished

So love The Border Laird's Bride:)The whole book is just as fabulous as this extract!

Thank you so much, Alissa!!! I'm thrilled you enjoyed reading The Border Laird's Bride:)

I have almost reached this scene in the book :-) That Jamie Graham is a sexy beast!!

LOL! Thanks so much, Christina! I think Jamie is sexy, too:) I hope you enjoy the rest of the book. And thank you so much for showcasing my debut release here at your hot and sexy blog:)
Hugs x