A Marriage Made in Mayfair ~ Tamara Gill with Giveaway

Today I'm delighted to welcome fellow Aussie historical author Tamara Gill, who is celebrating the release of her Regency novella, A Marriage Made in Mayfair. The cover is absolutely sumptuous! 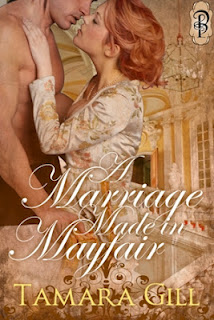 Here's a little about Tamara, pinched directly from her website!

Tamara's love of history started from an early age, but her reading of historical romances only began when home on maternity leave with her second son. Her writing career started as a hobby but soon turned into an obsession—just ask the members of her family, who have suffered many a whipped up, burnt meal.

(No wonder we're friends. My poor family have suffered countless burned offerings over the years!!!)

Thank you for taking the time to drop by my blog, Tamara. It's great to have you here! Could you please tell  us a little about yourself

Thank you Christina for having me as a guest today and letting me talk about my latest release, A Marriage Made in Mayfair. I’m a South Aussie who writes Regency and time travel romance. I started to write about 4 years ago as a hobby while on maternity leave. About a year after I started to write I found Romance Writers of Australia and I’ve never looked back.

Regency and time travel. Two of my favourite things! Can you tell us a little about your book, A Marriage Made in Mayfair

I had this fantastic idea about a lord who falls on hard times and an heiress he’d previously been dismissive of finding love together. It’s a sweet story between two people from different society spheres who are made for one another. You’ll have to read it to find out any more. :-)

Miss Suzanna March wished for one thing, the elusive, rakish charmer, Lord Danning. But after a frightful first season sees her flee to Paris, such dreams seem impossible. That is until she returns to London, a new woman, and one who will not let the ton's dislike of her stand in her way of gaining what she wants. Revenge on the Lord who gave her the cut direct and perhaps a little flirtation to show the mighty Viscount what he'll never have.

Lord Danning unbeknown to his peers is in financial strife and desperate to marry an heiress. Such luck would have it Miss Suzanna March fits all his credentials and seduction is his plan of action. Yes, the woman who returned from Paris is stronger, defiant, and a little argumentative, but it does not stop Lord Danning finding himself in awe and protective of her.

But will Suzanna fall for such pretty words from a charmer only after one thing. Or will Lord Danning prove to Suzanna and himself that she is more than his ticket out of debtor's prison...

I’m a HUGE Karen Marie Moning fan. I know she doesn’t write Regency, but she’s just fantastic! I love every single one of her books and can’t wait to see what she’ll give her fans to read next. With the simplest words she can evoke emotion, tension everything a reader wants. She’s amazing.

It's no secret that I am a huge fan of my CPs :-) Do you have CPs? If so can you tell us how you met up and your process? (see above for my impossible nosiness!!!)

I have one cp, Joanna Lloyd and I love her to bits. She’s fantastic at grammar and punctuation which I am not. LOL We met through the Romance Writers of Australia cp program and just clicked. We’ve been working together now for the past two years.

What's the best and worst things about writing for you?

Now that I have a couple of stories published the best part for me would be reader feedback. I love hearing that someone loved my story and characters and that they didn’t want the story to end. I love reading those kinds of comments. The worst for me is time. I never seem to have enough of it and struggle some days to even get in front of the computer. And if I don’t write I tend to get snappy. ;p 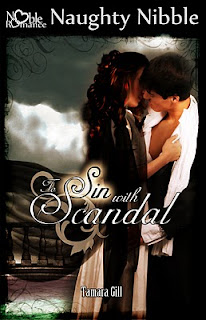 Tamara's debut, a Naughty Nibble, To Sin with Scandal

And finally, do you have any advice or light bulb moment you'd like to share about getting/being published?

Keep writing every day. Don’t worry if you never final in a competition or someone says you should write in a different genre because you suck. I’ve had all these things happen and said to me. Learn to shrug your shoulders and move on. You’ll never please everyone at that’s just life. Enjoy what you write and write from the heart. In time everything else will click into place. 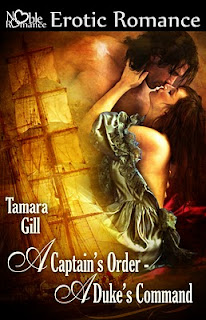 A Captain's Order, A Duke's Command - this gorgeous cover won the Romance Writers of Australia's Best 20 Years of Romance Covers Contest in the Historical Section in 2011 (along with Captive!)

Tamara has also sold two time travel romances to Crimson Romance. The first, A Stolen Season (I've been lucky enough to read this and it's fab!) will be out this August. Defiant Surrender, a medieval romance is coming soon.

Leave a comment for Tamara to go into the draw, at the end of her month long blog hop, to be in with a chance of winning the following fabulous prize:

Postcard Sets
Romance Trading Cards
$30.00 Amazon Gift Card
Copy of A Marriage Made in Mayfair
And a copy of my two previous works
gifted through Amazon.com
(or preferred e-reader store)

Labels: A Captain's Order A Duke's Command, A Marriage Made in Mayfair, Romance Writers of Australia, Tamara Gill, To Sin with Scandal

dear tamara...
i'd love to read ur books...i like the covers so much...is this internatonal giveaway ?
because i want to win the prize...
keep success...
regard from indonesia :)

Thanks for dropping by and saying such lovely things about my covers. I too just LOVE them.

And yes, this is an international giveaway so good luck!

Hi Nurma, aren't Tamara's covers gorgeous? I love them too! Thanks for dropping by!

i hope win ur book,

and love the cover

Hi Tamara love the excerpt of your book, hmm time travel romance sure thing would be a fun reading:). Wish you all the best with your books:). Aretha zhen, ArethazhenATrocketmailDOTCOM

Thank you for stopping by, Newan! And good luck!

Thank you for stopping by, Aretha. Time travel romance is always fun to write and read.

Thank you for the fabulous post ! Your books sound awesome ! I simply must add you to my list ! Thank you also for a really awesome giveaway !Desere

Thank you so much, Desere! I'm flattered.

Good luck with the giveaway!

Have been so long not in touch, hope you still remember me :D

Wow...congrats on winning romance Writers of Australia's Best 20 Years of Romance Covers Contest in the Historical Section in 2011 for a captain's order and also for christina for captive :)

the cover really georgeous and i hope the story too :D

thanks for the chance to win your book.

Hi Newan and Aretha, thanks for popping by!

Hi Eli! Lovely to see you again :-) Thanks for joining in the fun!

Thanks for dropping by, Eli!

Christina and I were stoked to tie for the cover prize. It was a huge shock, I didn't think I stood a chance.

Thank you, Bn for dropping by and saying such lovely things about my books!

hi tamara and christine, im never read your book. and maybe this is a chance to me to win some giveaways. .

such a beautiful cover.

Hi bn and Cecilia! Thanks for stopping by!