Awakened by a Kiss ~ Release Day! 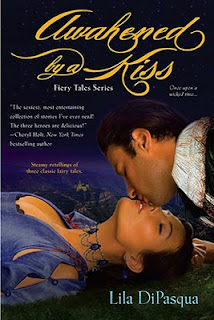 How gorgeous is this cover!

Lila DiPasqua, fellow Berkley and debut author, is celebrating the release of the first book in her Fiery Tales series, and I am soo looking forward to getting my hands on it! Awakened by a Kiss is the steamy retelling of three classic fairy tales:

Sleeping Beau: Five years ago, the notorious rake, Adrien d’Aspe, Marquis de Beaulain, was awakened by a sensuous kiss—and experienced a night of raw ecstasy that was branded into his memory. Years later, he spots his mysterious seductress—and this time, he has no intention of letting her go…

Little Red Writing: Nicolas de Savignac, Comte de Lambelle, has been assigned by the King to uncover the secret identity of the author writing scandalous stories about powerful courtiers. He never expected his investigation would lead to his grandmother's house, or to a ravishing woman who would stir his deepest hunger…

Bewitching in Boots: Elisabeth de Roussel, daughter of the King, is accustomed to getting what she wants—and she wants Tristan de Tiersonnier, Comte de Saint-Marcel, an ex-commander of the King’s private Guard. A recent injury has forced Tristan to leave his distinguished position, but Elisabeth is determined to make him see he's every bit the man he once was—and more than man enough for her..

You can read an Excerpt here!

Posted by Christina Phillips at 5:19 pm

What a beautiful cover!

i have this on order...i cannot wait to read it!