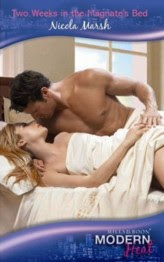 Please welcome my special guest this week, Harlequin Mills and Boon Romance and Modern Heat/Presents author, Nicola Marsh, who's chatting about her new release, Two Weeks in the Magnate's Bed! And for our viewing pleasure, Nicola's suggested the sexy Brandon Beemer! Mmm, must admit I love those blue eyes too!!!

As a girl, Nicola dreamed of being a journalist and travelling the world in search of the next big story. Instead, she chose a career in the health industry while honing her writing skills with a daily entry in a "not-so-secret" journal!

The inspiration for her first novel, THE TYCOON'S DATING DEAL, came from a magazine article on speed-dating and she sold this book in May 2003. It won the CataRomance Reviewers' Choice Award for Best Harlequin Romance 2004.

Nicola currently writes for Harlequin Mills and Boon Romance and Modern Heat/Presents series, has published 19 books and sold over a million copies worldwide.

When not writing, she's busy chasing after her two little heroes!

Hi Nicola, thanks for popping by today! Can you tell us a little about your book?

'Two Weeks in the Magnate's Bed' is loosely linked to my recent Waldenbooks Bestseller, 'The Boss's Bedroom Agenda'. In 'The Boss', Lana is the heroine's shy, geeky cousin. She featured in several scenes and definitely had a tale of her own to tell, so I sent her off on a South Pacific cruise where she meets a very sexy, very enigmatic sailor.

Zac McCoy is a charmer and Lana is soon floundering out of her depth. But this Cinderella may just have a few surprises in store for her Prince Charming yet...

'Two Weeks in the Magnate's Bed' (Harlequin Modern Heat) is out now in the UK, will hit Aussie/New Zealand shelves in May and the USA, as a Harlequin Presents, in September.

I love cruising and actually fell in love for the first time on one. It was a magical experience filled with romance so little wonder I had to write about it...and no, it's not autobiographical!

I was working full time as a physiotherapist, had been for many years, and always used to say 'I'd love to write a book one day'. Was at work one day having lunch, got tired of saying it, so Googled 'romance writers in Melbourne'. Joined the Melbourne Romance Writers Guild, discovered there were people out there who loved writing as much as I did and I started submitting. My first partial, aimed at Harlequin Presents, was a positive rejection asking to see more work. My next partial...they requested the full...then 4 months later, I was home on a Saturday night, 5 months pregnant and dinner plans cancelled, when the phone rang. It was Kim Young from Mills and Boon! She said my voice was more suited to the Harlequin Romance series and requested a few revisions by the following Tuesday.

I did them, emailed the book off a day early and waited...A week later on the Monday, I was cooking dinner when the phone rang at 6.30. Hubby answered and gave me a thumbs up sign so I took the phone and...it was Kim saying she loved the book and wanted to buy it! I'm sure I repeated the word 'great' a hundred times during that first conversation!! Being an author is a dream come true :)

What a wonderful sale story! As you know, we're all about the love here, so please share your fave books, movies, TV shows or current fantasy squeeze (it's all in the line of research!) 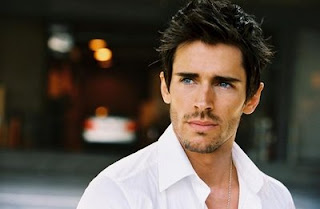 Fave TV shows: 24, Prison Break, The Mentalist, Brothers and Sisters, Lie to Me
Current fantasy squeeze: oooh...toughie...Antonio Sabato Jnr. was the inspiration behind the book I just handed in, so I guess him. Though Brandon Beemer is going to feature in an upcoming book...love those blue eyes...

I'm a total sucker for guys with blue eyes *happy sigh* Can you tell us what you're working on now?

I've just finished revising my 20th book, a Modern Heat, and awaiting word from my editor. I'm about to start revisions on my next Harlequin Romance, 'The Dating Dilemma'.
Then it's onto writing something brand spanking new!

How can readers keep up with your writing and books?

I blog daily about all sorts of things, including writing stuff, so a visit to my blog is always handy.
Or readers can sign up for my newsletter, which I send out quarterly and around releases.
I also have a website, I'm on Facebook and MySpace. You can say I'm all over the place!

Posted by Christina Phillips at 10:28 am

Hey, is there a Golden Rooster here? I think I just won him! Hi Christina. Hi Nicola. Great interview, girls. Nicola, this book sounds so yummy! Congratulations on all your success.

Nicola, I've said it before but I LOVE this cover. It would have to be one of my faves - a half naked man on the cover always catches my eye (forget the heroine! Lol).

Christina, thanks for the interview! Btw I have no idea who Brandon Beemer is. Let me go and google him now... :-)

Hi Anna! I've only ever come across the Golden Rooster over at the Banditas... maybe I should find a Golden Cockatoo or something... lol...!!!


Hey Mon, I'm partial to a naked man on book covers myself!!! And I have to confess, I googled Brandon Beemer too!!!

Hi Nic,
Nice to see you here! Thanks for mentioning the Melbourne Romance Writers Guild :)

Love that sizzling cover and (Hi Mon!) I also had to Google Brandon Beemer. What can I say...? Wow - just WOW!

for a second there I was having a deja vu moment with that golden rooster! He's following me everywhere!!!

Mon,
this cover is one of my faves too...very sexy guy ;)

Thanks for having me, Christina :)

(and waving to Serena!)

Thought you might all be dashing off to Google Brandon...but he's mine, I tell you, all mine!!! (insert maniacal laughter)

Hi Nicola, Good interview, and this sounds like a great book! Congrats on all your success. You are a dream come true for many of us writers!

This sounds great, Nicola. I love cruising stories! Congratulations on your success!

Love the cover as well, Nicola. Much luck on your continued success.

I really liked the cover to this book. Who wouldn't?
What a great way to fall in love, on a cruise! Great sales for you.

Oh, I love "Dirty Dancing", too. And I love a man with dark hair and blue eyes. Dreamy!

Thanks Kaye,
what a lovely thing to say :)

Thanks Helen and Catherine :)

It was sooo romantic, Mary :)

Hey and there's Shawn from Days of Our Lives.

Hi Nicola,
Wow what an interesting road to publication, and to be where you are. Congratulations.
I agree with the cover, hmm.. very nice. :) I mean the guy.

I discovered he used to act in DOOL when I checked out his website.
I only know him from BATB.

Hope you all have a lovely weekend, I'm off to spend the day with my little heroes. :)

I enjoyed the interview, and I have to say that I adore cruising too. The book sounds great. :)

Great interview, ladies! Nicola, best of luck with all your future books! :)

Thanks Shelley and Cari :)