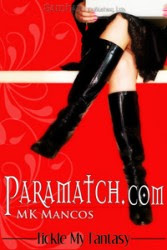 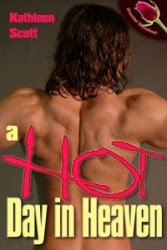 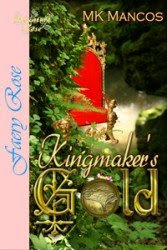 Please welcome my special guest this week, Kathleen Scott, who writes "steamy sci-fi, futuristic, fantasy, and paranormal romances where legendary creatures and remote galaxies are an every day occurrence. Where science, sorcery and sex make interesting and otherworldly lovers."

Can you tell us a little about your book?

When I hear this question I always want to say, "Which one?" I have a few on my list now and I'm always eager to push all my babies.

Here's some blurbage for your reading pleasure.

A Hot Day In Heaven by Kathleen Scott

Bad things always seem to come in threes, or so Sonia St. Marie discovers as she is kicked out of her apartment during a blizzard, her job teaching art classes at an adult center gets cut and she catches her boyfriend in bed with her best friend. Needless to say, it’s not been the best of days. That is, until Archer DeAngelo shows up in his black SUV, smelling of exotic spices and evoking a head full of sensual fantasies.
For years, Archer has been the distraction in the back of Sonia’s mind, tempting her to wonder about his decadent lifestyle and the women he’s pleasured. Just looking at him makes her dream of all the things she wants to do with him, and now that she’s free from her philandering boyfriend, Gabriel, there’s nothing to stand in her way.

Seeing Sonia’s distress at her homeless state, Archer offers her a place to stay--his condo overlooking Central Park. Having nowhere else to go in such inclement weather, Sonia takes him up on his offer for shelter and much more. The sexual tension that always simmered between them goes into overdrive under such close proximity. The fact Archer has made it his mission to help her put her life back together has its own advantages. But then again, Archer is only doing his job.

Gold —the name alone evokes dreams of riches beyond imagination. Whether one is a mortal woman or one of the fey men who inhabit New York in 1910, the precious metal can have great impact and far-reaching consequences. For Abigail Westmorland, a single gold coin stands between her and destitution. For Venn, a contender for the leprechaun throne, it means the difference between leading the fey or being led by his cousin, the dark fey, Lachlan. Together Venn and Abigail find true love is more precious than any gold.


Dating in today’s world is tough enough. Pair it with a paranormalady, and Lucille Wainwright is living the recipe for loneliness. Born a talentless witch in a family of legendary spellcasters, she’s managed to carve a niche for herself with ParaMatch.com, a matchmaking service for paranormal beings.
What she lacks in the magic department, she more than makes up for with her uncanny ability to conjure committed relationships out of any combination of traits and backgrounds. Until now.

Enter Jager Cronus, deposed king of the Titans and successful paratrader. As a client, he’s a nightmare. As a man, he’s irresistible. When he demands a date with her to the annual Legion Halloween Dance, she’s hard pressed to refuse. With her professional ethics warring with a deep need to prove herself, she gives him two more chances to find love.
That’s all the opening Jager needs. After all, he didn’t survive his downfall without learning a few things about prevailing in the face of the stiffest negotiations.
Now he’s about to negotiate the deal of a lifetime—a future with Lucilla.


How did the idea for the plot come about?

I have no earthly idea. Sometimes it's snippets in a dream, sometime it starts with a sentence beginning with "What if.." Since I write in several different genres under three names, I can get my ideas from anywhere and twist them to my pleasure. I'm also a documentary junkie. I love them. I don't care if they're about frozen wastelands on distant planets, or the mating cycle of the dung beetle, I'll watch it. I have such varied interests and have a life-long love off all thing paranormal or strange or considered occult. That interest makes for some interesting plot lines no matter the backdrop of the story. Though I will admit that Kingmaker's Gold was written specifically for St. Patrick's Day so I had that criteria when I fashioned the idea. When I saw that as one of the holidays for special stories at the Wild Rose Press, I knew I had to do it. Christmas, Halloween and Valentine's Day are usually the big ones that romance writers do special stories for - but my long forgotten Irish ancestors called to me from somewhere in my blood and I thought it was a perfect holiday to come up with a historical paranormal. There is a sequel to it in the works. The villian wouldn't let me alone until I told his story.

A Hot Day In Heaven just kind of evolved as I wrote it. I'm generally a plotter, but every once in a while a story will write itself. This was one of them. I started out on the first line with a snowy day in New York and the words just started spilling out with no idea where I was going or what I was doing with them. But I think the end result is worth the effort. And I just sold the second book in that series to Wild Rose/Scarlet Rose titled, Hotter Than Hell. As for Paramatch.com, that's one of those stories where you read one by your favorite author and you're like, "I wonder if I could do a story with that type of character." For me, it was a Susan Elizabeth Phillips novel, Match Me If You Can. (I love Susan - to me, she's a goddess!) And though I loved that book so much, I knew I didn't want to do a contemporary matchmaker unless there was a really great twist. Bring on Lucilla Wainwright, a talentless witch who has to make her way in the world using old-fashioned ingenuity and a dynamite computer software program. When I knew that, the opening scene pretty much came to me in a flash and I knew Lucilla as if we'd been friends for years.


I love sale stories (ok I am just nosy!!) so can you tell us about your road to publication - and your call story?

It's been filled with potholes and rakes (not the luscious hero-type, but the garden implement variety.) I really started writing for publication about 14 years ago or so. My sights were set on becoming the next Mercedes Lackey, but I never got a bite with any of my fantasy novels, though I do have some rather loverly rejection letters. I stepped back, reevaluated my goals. I've always loved romance, since the first time I held a copy of my mother's Barbara Cartland in my hand. *sigh* And truthfully, my fantasy had a lot of romanctic undertones. Everyone had a love interest, or was involved in a love triangle of some sort. I decided to write where my love was and began to hone my craft in romance. However, me being me, I can't do anything straight forward, so my first romance novel was a romantic suspense with a paranormal twist dealing with near-death experiences. It was plum awful. After many years of sitting under the bed (or in this case a box in my basement) for many years, I decided to streamline characters cut the beginning and start mid-action and start from the first word on a rewrite. During this time, I had gone back to college after being out for...well, we won't say how long...and worked on my degree in English with a writing concentration. I'd already learned so much on my own, but those classes gave me the extra push I needed to begin sending my work out again. I'd received a freebie copy of one of Red Sage's Secrets anthologies from an NJRW conference and one night when I didn't have time to start reading a novel, I plowed through that book as if it were the last one I was ever allowed to read. Amazed and bewildered (would I ever attain such professionalism in my prose?) at the high standard set by Red Sage's authors, I was bound and determind to write for them. I had a futuristic story about computers who not only run the government, but have become the government. I hadn't finished it and thought if I built up the romance, upped the sexual tension and made it more graphic, I might have a shot. I'll be damned if I didn't sell that sucker on the first go. Fatal Error appears in Secrets Volume 17 Erotic Nights. I remember the call very well. My husband, Dave, and I were sitting in the living room preparing to watch our taped episode of Battlestar Galactica when the phone rang. I don't remember much after that but dancing around the kitchen and my husband giving me a hug that cracked a rib. We were both pretty excited! And you know what? I still get just as excited when I sell a book, though hubby just gives me a gentle kiss and a normal hug now.

We are all about the love here, so please share your fave books, movies, TV shows or current fantasy squeeze (it's all in the line of research!)

Well, just about anything that has a sci-fi bent to it will get me to watch. Also, CSI shows, both documentary style and the fictional type. Cold case shows, City Confidentail, American Justice. Books, I have so many favorite authors I wouldn't be able to list them all here. I read a variety of genres, but mostly romance and it's sub-genres. Though I have found romantic elements in just about every book I've picked up randomly at the library.


What are you working on now?

At any one time I work on about 5-7 books. I'm weird that way. It helps to keep me from getting writer's block. If I get stuck somewhere, I will pull up the next file and get to work. It makes me feel productive while I'm trying to work out the problem that got me stuck in the first place.

How can readers keep up with your writing and books?

Five to seven books at one time? You're amazing. Congratulations on your success!

Great interview Christina. And Kathleen sounds like a girl after my own heart. I love sci-fi tinged romance too. Can't wait to check out your work!

I had great fun with this interview, Christina. Thanks so much for having me along.

What a great interview! I'll definitely have to pick up some of your work, Kathleen! :)