Welcome to this Sunday's Sneak Peek where I share six paragraphs of my debut release from Ellora's Cave, Betrayed.

A Druid priestess is captured and enslaved to a Roman tribune who must decide whether his loyalty lies with his heritage or the woman he suspects may be Rome's deadliest enemy... 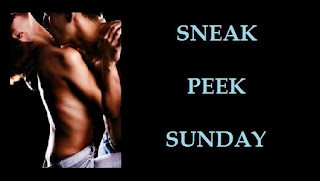 Nimue is recovering from having an arrow removed from her shoulder, and is still under the influence of the pain killing opium. Tacitus is doing his best to resist her charms :-)

Languidly she brushed her fingers over the uncompromising line of his jaw. He was rough, and chafed her skin. Entranced, she rubbed her hand along his jaw again, and again the roughness caused tingles of desire to dance through her blood.

“Why not?” If only she could see his face properly. From recollection, his face was worth looking at. She was sure his body was too.

“Because I’m on duty.” For a fleeting moment, he glanced down at her, and the blatant lust glowing in his eyes caused raw need to bloom deep between her thighs.

Her lips parted, but it didn’t help her deprived lungs because every jagged breath held a subtle hint of foreign spices that fogged her reason and heightened her desire. Tendrils of fire wove through her blood, curled around her nipples, flickered with sensuous intent through her quivering sheath. He would not chose duty above her when she craved for his touch on her burning skin. When she ached to be filled by his tongue and his cock.

The image pounded against her temples and again she moaned. She imagined him spreading her thighs and impaling his length inside her wet folds. If he did not take her soon she would shatter from unfulfilled need.

“Are you in pain?” Once again he was looking straight ahead She turned her wrist and dug her nails into his face, and satisfaction spiked when once again his gaze clashed with hers. 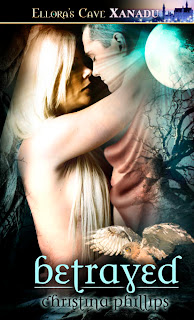 For the month of April All Romance Ebooks has 50% off Ellora’s Cave books! Buy BETRAYED for only $4.38!
Ellora’s Cave  Publishing   Amazon

Well that's telling him. I have this sitting on my reader. I need time to read!!

And I sooo hear you on finding more time to read!!

I am very happy for you Christina,I love this e-book the cover woo
and I wish you great success on this book and others have a wonderful Sunday
Cheers

I'm so pleased you enjoyed reading Betrayed! Hope you have a wonderful Sunday too :-)