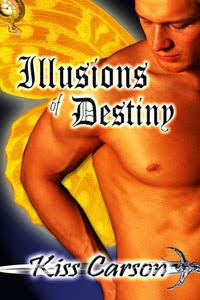 Please welcome my special guest this week, fellow Aussie and The Wild Rose Press author, Kiss Carson, who's chatting about her recent release, Illusions of Destiny!

Kiss Carson has always loved stories that whisk her away from the real world and dump her right in the middle of a once in a lifetime adventure. Danger and love always seem to go hand in hand, along with a little bit of fantasy or paranormal. Her collection of dragons and knights give her inspiration, as does the ghost that lives in her bathroom. She lives in Queensland, Australia, with her very own dashing hero, two budding heroines and a hero in training (and Fred the Phantom Flusher).

Hi Kiss and thanks for stopping by today. Can you tell us a little about your debut book Illusions of Destiny?

Illusions of Destiny is a fantasy romance based in the early 16th century, in a different dimension. It follows the heroine, Ianna, as she travels through time and meets the man of her dreams, Regan Shay. Regan is part of a mythical race of winged people called sidhe. The evil queen of the sidhe is besotted with Regan and does everything she can to keep the two of them apart. There’s lots of action, romance and one of my favourite love scenes.

When Ianna Ward receives a mysterious parcel, she thinks someone is playing a trick on her. However, the contents of the 16th century chest transports her back in time to a different dimension where the sidhe, a mystical race of people, war with humans. She meets the mysterious and appealing Regan Shay, the sidhe leader, and her attraction to him is as powerful as his hypnotic gaze and devastating grin. But someone else has laid claim to Regan and will stop at nothing to keep him within her cruel grasp. With the help of unicorns, dragons and a cheeky Pegasus called Mercury, Ianna fights for love. Is she strong enough to battle destiny and change her life forever?

Oh, I love reading about different dimensions! How did the idea for the plot come about?

I really can’t remember EXACTLY what inspired me. I actually wanted to write a Scottish time travel ... Somehow, the hero grew wings and the heroine became a cynical divorcee. I think I was researching mythical animals one day because I wanted to somehow incorporate them into the storyline. Then, I came across the sidhe and fell in love with them. The rest, I made up as I wrote. (I’m a panster!)

My road to publication **sigh** contained many, many, many rejections from both publishers and agents. Apparently my stories just didn’t fit the “mould” of a modern romance and because I write fantasy (with mythical beasts), the publishers believed their readers to be too intelligent for my sort of stories (true! I was told that by TWO publishers). Well, I started in earnest about two years ago and sent off my manuscript Jewels of the Sun to a private editor who loved it so much that she offered to help me self-publish. I rejected her offer because I’d picked up an agent in Melbourne who also loved Jewels of the Sun. Twelve months later, after a few more rejections, my agent dropped all her writers due to illness ... I’d just finished Illusions of Destiny and I was pretty much at an all time low. It was a case of get published or work full time (I work part time) and forget about writing - something I’d done all my life. I’m a member of the Romance Writers of Australia and one of their authors announced that she’d signed a contract at TWRP. Nearly at the end, I checked out the guidelines and Illusions of Destiny fit them perfectly! So, I sent off the first email and synopsis and had a reply within a week ... send the first three chapters ... ooooh! ... Two weeks later, another email, send the whole manuscript. Well! I was beside myself. I’d never been that far before and ... ooops, Illusions of Destiny needed a rewrite! I rewrote 85 000 words in seven days, sent it off and 4 weeks later, received the contract. I still can’t quite believe it and I’ve just signed my 2nd contract for Jewels of the Sun.

We are all about the love here, so please share your fave books, movies, TV shows or current fantasy squeeze (it's all in the line of research!)

My favourite book is A Touch of Enchantment by Teresa Medeiros. My favourite movies are Phantom of the Opera (2005), A Knight’s Tale, The Day After Tomorrow, and the Jurassic Park Trilogy ... I’m a bit of an action freak. I love Lost, Ghost Whisperer and Most Haunted. I really liked Life on Mars. My current fantasy squeeze ... too many to choose ... I like Eric Bana and mmmmm Gerard Butler.

What are you working on now?

At the moment, I’m working on two manuscripts. One is a novella of about 45 000 words. It’s a little bit HOT and contains a ménage. I know! I’ve never actually written erotica before and I’m not sure I’m very good at it. The second is another full length fantasy called Angel Magic.

An angel story! Yay!! How can readers keep up with your writing and books?

I have a website www.kisscarson.com.au and when I take off, I’ll send out newsletters every now and then.

Posted by Christina Phillips at 2:46 pm

What a beautiful cover, Kiss!

Touch of Enchantment was the first book I ever read by Teresa Medeiros. Now I never miss one of hers.

Congrats on your new release. The cover is beautiful. I'm also a Ghost Whisperer fan. :-)

Great interview, ladies. Like Shelley, I love the Ghost Whisperer. Wishing you lots of success! :)