"My price is your soul." BLOODLUST DENIED #vampire Regency Romance #99c for Limited Time Only


Stir with a dash of arrogance, season with angst and a fractured sense of honor.


Add a seething thirst for vengeance and an insatiable craving to possess the elusive Morana.


Marinade with timeless secrets, cursed immortality and an ancient pact with Death.


Sample at your own risk… 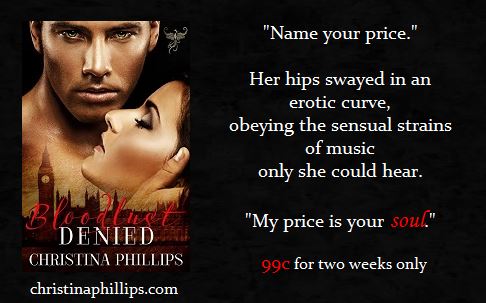 This book was previously published with Ellora's Cave in 2013 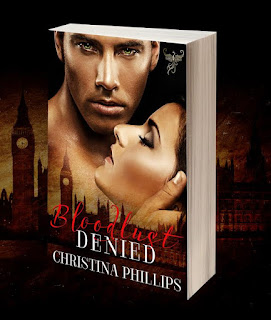 “I was very happy when I read the blurb, as I am a fan of paranormal, erotica, and I love a good regency romance.  Phillips gave me all three, so how could I not be absolutely thrilled!”  4 Stars  Vampire Romance Books

“I wanted to figure out what was going on and why the two had such fiery chemistry: their sex scenes (and they were frequent) leapt off the pages to tickle and entice in all the right places like a giant steam bath.”  4 Stars The Jeep Diva

“Sultry and seductive, Bloodlust Denied is both intriguing and romantic.” 4 Stars You Gotta Read Reviews
Posted by Christina Phillips at 6:00 am

Hi Christina! Seems people don't post on blogs much as they did a few years ago. It's Kaye here and finally I'm back. Been gone a while but working on some writing now. I have a blog post up that tells about where I've been on the SF blog (kayemanro.blogspot.com) called Changes Finally Changes. I've been lurking around and posting on my two blogs for about a month. But hey-- how are you? It looks like you are doing well with the writing. Great! I have missed everyone, now that I'm finally back I really feel it. I just wanted to orient before I connected with others. I guess I'm ready now though! My new venture is about Soul-Love. Good to see you and hope we can connect more often now.

Kaye it's fantastic to hear from you again! We must definitely catch up and stay in touch. I miss the old days where we used to chat! And yes, it seems now days everyone connects on Facebook. I'll pop over and say hi on your FB page! I'm so glad to see you back xo