Can You Handle the Heat? Secret Confessions: WILLOW #MySexySaturday

This week's theme is One Sexy Night, and I'm sharing seven paragraphs from my latest release, Secret Confessions: Willow. Willow and Seb have been in love with each other for years but have never done anything about it because of something that happened in the past.

But Seb is nothing if not resourceful, and he's decided that Tonight is The Night... and he has some mind blowing techniques to get Willow to change her mind about taking a chance on him :-) 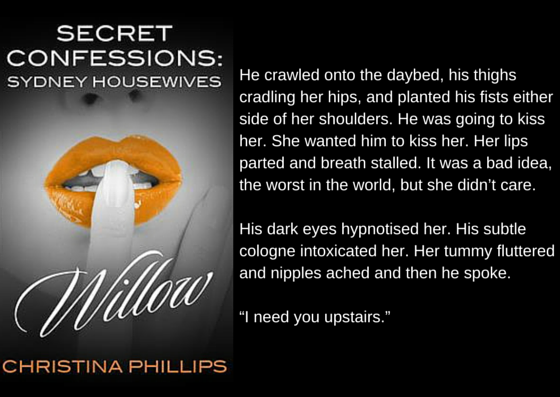 And when Seb has her upstairs, the games are only just beginning...


In the flickering light from the candles he looked strangely primitive looming over her. And why was he still fully dressed? That wasn’t fair.

He flexed his fingers. She stared at them, mesmerised. “Totally.”

Nothing is hidden, nothing is forbidden – and nothing will ever be the same
Secret Confessions: Sydney Housewives throws open the doors to how the other half lives – and loves.


Willow has loved Seb for as long as she can remember, but he has a past that she can’t handle, so she’s never done anything about it. But to not have him in her life is unthinkable, so  she holds on to him the only way she can – through friendship. Now his writing career is taking off, and Willow finds herself increasingly jealous of his groupies and increasingly unable to keep her feelings to herself.

Take the Quiz! Which Sydney Housewife are you?
Don't forget to check out the other awesome authors in My Sexy Saturday!

Posted by Christina Phillips at 8:48 am

Sounds great, Christina. I'm off to grab my copy :)