I'm delighted to welcome back the lovely Téa Cooper with her latest release, Lily's Leap! And Tea is kindly offering a giveaway of one of her other recently published books to one lucky commenter!! The winner can choose between  A Winning Streak or Matilda's Freedom so don't forget to leave a comment :-) 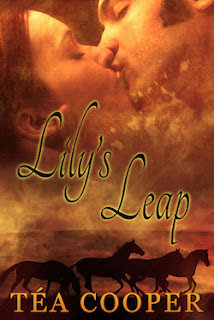 
Born into privileged society, Lilibeth Dungarven finds herself married, widowed, and much to her distress, back under her father’s rule, all before her twenty-first birthday. But this feisty and independent young woman has a dream: she is determined to breed the perfect racehorse and restore the family’s flagging fortunes. An accomplished rider, she takes matters into her own hands and sets out to restore Dungarven horse stud to its former glory.


When the devastatingly attractive Captain Tom and his mismatched band of bushrangers stumble across a mob of the best horses they’ve ever seen, and the daughter of the famed Dungarven stud, they know their fortunes have changed. Their catch is worth a king’s ransom. Surely it can’t be too difficult to contain this beautiful young woman with violet eyes and skin-tight riding breeches for seven days?

Lily could see the pale ribbon of road below cutting through the trees and the bright blue expanse of sky wide-open in front of her. “Nero. You can do it,” she whispered into his sleek, shiny neck and he snorted in response. Her thigh muscles burned as she tightened her grasp on his flanks. His muscles tensed in response, attuned to her body. She gritted her teeth and willed her shaking hands to steady. “We can do this, Nero. We have to.” Her heart hammered so hard in her chest she thought it might leap right over the culvert and down the hill ahead of them.


With barely a moment’s hesitation she dug her heels into the stallion’s flanks and urged him down the hill. The last trees cleared and the sudden heat of the sun stung her face, then she crouched low over Nero’s neck. The clatter of his hooves on the sandstone surface told her they had reached the road. The blood raced through her veins, pulsing in her ears, a violent and excruciating pounding raged through her body.

“Stop.” Tom’s command echoed around her as the blocks of the convict hewn, sandstone walls reared ahead of her. Surely it wasn’t such a huge jump for a horse like Nero?

She leaned forward in the saddle and her cheek brushed the dampness of his neck. Time slowed. With her eyes squeezed tightly shut she sucked in a great gulp of air and clenched her teeth tightly together. Nero lifted into the air. His muscles bunched beneath her and he flew over the chiseled blocks and down the slope. Her knees gripped the saddle and she dragged the reins almost vertical as they plunged down. Tufts of wiry grass and small rocks littered the route. She flinched as Nero’s hooves crashed across them. Gasping in a quick breath, she prayed for the terrain to level off.

Her lungs contracted like bellows and what little air remained, whistled out through her pursed lips. Nero tensed and she shuddered as he stumbled and then regained his balance. Her heart leapt to her throat and her wrists twisted as she wrenched on the reins to slow him. He quivered to a halt. Silver spots danced in front of her eyes and she gulped in a breath to feed her starving lungs. Nero’s muscled body trembled and quaked beneath her and white froth flecked his muzzle.

“We did it, darling Nero. We did it.” The salty tang of his body filled her nostrils as she leaned over his neck murmuring endearments. She swayed with exertion and forced her rubbery muscles to respond as she squinted into the sunlight. Figures on horseback towered above her, stalled on the road. She had an overwhelming urge to wave her hand and shriek in triumph.

But she resisted; this was her opportunity and she had no time to waste. She cut away to the right praying her memory of the maps was correct as she searched for the track leading her to Laguna.

“Lil-eee. Lil-eee.” Tom’s call bounced off the sandstone walls. Shading her eyes with her hand she stared back toward the culvert wall. It was empty.

“Lil-eee. Lil-eee.” The sorrowful echo reached her, resounding somewhere deep in her gut. Her sweat-soaked curls clung to her face as she shook her head, raging at her ridiculous foolishness. After such an exhilarating and successful leap for freedom why did she suddenly feel so melancholy? Her heels bruised Nero’s flanks and she urged him away in a fast canter.


And now a little about Tea!
Téa’s always knew that one day she would write a novel. It probably started with a rather risqué story in the back of an exercise book at boarding school featuring the long suffering school gardener - not really the stuff romantic heroes were made of but it was before she knew any better.

Life and few heroes of her own showed her the error of her ways and with a baby under one arm, a husband and a half built house she entered a Mills and Boon competition. To her absolute earth shattering amazement she won second place – the prize was a bottle of perfume! Next time she determined she would do better.

But it was still the stuff of fantasy and her family, a herd of alpacas, a protea farm and teaching intervened until one day she decided it was time to do or die. No more procrastination. The characters and plots that had lived in her head for so long were clamoring to escape.

In August 2011 she got serious and joined Romance Writers Australia, entered the Harlequin Mills & Boon New Voices competition and to her horror wasn't discovered. Not even a bottle of perfume this time. But in reality she had won. Procrastination was conquered and determination set in. It was time to get serious.

Her first contemporary romance novel Tree Change was published in November 2012 followed by The Protea Boys and Passionfruit & Poetry in 2013. She has also written two historical romances - Lily's Leap and Matilda's Freedom - inspired by some of the fascinating characters haunting her local museum and a novella set in Ancient Greece.

When Téa is not in the museum she can be found on Facebook, Twitter and Goodreads or you can email her at teacooperauthor@gmail.com
Website link: www.teacooperauthor.com

Thanks for the invitation - again!

It's a great excerpt, I love it!

I am always looking for new authors to read. Your book sounds like the kind I enjoy reading. I have put it on my TBR list
JWIsley(at)aol(dot)com

Lily's Leap does sound wonderful, I'm so looking forward to reading it!

Lily's Leap does sound wonderful, I'm so looking forward to reading it!