Today I have the lovely Téa Cooper on my blog with her latest release, A Winning Streak, which has wrathful gods and goddesses! What's not to love?

And Tea is kindly offering one of her previously published romances to one lucky commenter - a choice of either Lily's Leap or Matilda's Freedom! 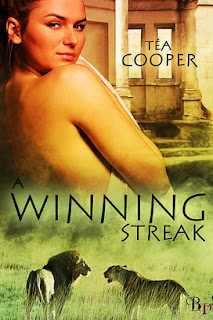 
Will the path of true love incur the wrath of the virgin Goddess Artemis?


Abandoned at birth, Atalantê, protégé of the goddess Artemis is forced into an untenable position by her estranged father, the King of Arcadia - renege on her vow of virginity or condemn her suitors to a sacrificial death.   The aristocratic courtier Melanion, cannot believe anyone would be foolish enough to put their life on the line for the dirty little predator whose reputation for speed and cruelty are legendary. That is until he falls under Atalantê's spell.


Consumed by desire and jealousy Melanion is determined to win Atalantê’s hand or die trying. He calls upon Aphrodite to assist him, little realizing that her noisesome brat, Eros has the pair of them in his sights and is determined to inject a little spice into their life. Spice that will devastate the path of true love and incur the wrath of the virgin Goddess Artemis.
Digital Edition: $2.99 | ISBN: | Length: 21,000 words
Publication Date: June 14th, 2013 | PDF – MOBI – EPUB |Timeless Line
Breathless Press

Purple thunderclouds swirled, and lightning slashed the sky. Artemis the Huntress, goddess of the forests and the hills, stood astride the mountaintop, staring in fascination at the frail human figure edging its way to the cave.
The figure gazed around furtively, then placed a tightly wrapped bundle beneath the shelter of the rocky overhand before stepping stealthily away through the glade of moon-white cyclamen flowers.
A flash of lightning illuminated the interior of a cave. Bounding effortlessly down the mountain, Artemis raged at the folly of mankind.
"Great Zeus above!"
Impossibly huge cerulean eyes stared up at her—the epitome of perfection. Artemis reached down and picked up the swaddled bundle. The scent of the fresh, sweet skin and the flawless rosebud mouth tugged at her heart as she cradled the tiny body close to her breast and raised her fist to the heavens. "This I vow, my little one, you shall become fleet of foot, a huntress, second to none and guided by my ever-watchful eye."
Pulling back the tightly wrapped swaddling, she gazed in awe as the plump, perfectly formed limbs pounded the air. "I name you Atalantê, my princess, for we are as one. In perfect harmony you will grow in my image, your maiden divinity never to be conquered by Eros."
Artemis listened as in the valley below, the Arcadian people held their collective breath. She stilled the lightning and dismissed the thunderclouds. Finally, when the pale sun rose, the frustrated cries of Lord Iasius filled the palace. "Gods! Take back your girl. Give me a boy to inherit my kingdom!"
The acts of men are rarely unheeded by the gods, and Artemis vowed compassion for her little foundling, seeing to her warmth and nourishment until the girl grew tall and nimble, slim of hip—a virgin huntress, in her own image.
Posted by Christina Phillips at 6:30 am

Thanks for spotlighting Atalante!

I've always had a soft spot for Atalanta, the girl who could outrun any man. A wonderful idea to write her story, Tea!
From Australian historicals and modern romance to ancient myth, you do have a wide scope. Keep it coming!

Thanks Venetia! She was quite a woman...back to my nearly completed next Aussie historical now!

It's my pleasure, Tea! I love those gods and goddesses :-)

Hi Venetia, thanks for stopping by!