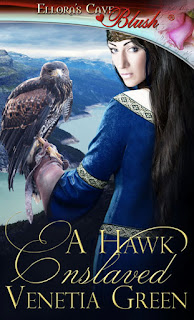 Blurb
A beautiful hawk tamer enslaved by Vikings.
Ragnar Ulfsson must find his king a concubine. His solution is Isolde, captured while climbing the sea cliffs for falcons. Enslaved in his own way, Ragnar has few qualms about binding another to his lord for the greater good. After all, it is an honour to share the bed of a king.
Isolde does not view slavery so complacently. Like a hawk caged, she is frantic to escape. The king’s hall is a bubbling stew of political intrigue and Isolde is an essential ingredient in the mix. Her only hope is Ragnar, who captured her but also promises to free her—eventually. But there is something strange about this dark Viking, oddly withdrawn and controlled, and their growing bond will lead her into greater danger still.
For Ragnar doesn’t touch women. For good reason.

Excerpt
The king’s hand had not left her throughout. At times it stroked her hair, or as if tired, rested on her shoulder as she sat huddled at his feet. Strangely, she did not mind. It was not a roaming, invasive hand. Instead it felt vaguely reassuring. For a fleeting instant she was glad she belonged to this king rather than becoming an ordinary thrall. The image of the serving-woman’s face stayed with her, that expression of dull endurance as a drunkard mauled her breast for all to see. Was that all such a woman had to endure? Isolde moved her eyes carefully away from the trestle of warriors and their attendant women. Things were getting steadily less inhibited down there. She would like to think those girls were there of their own will.
She became aware of a disturbance toward the queen’s end of the dais.
“You doubt our lord’s manhood, Lars?”
An ox of a man had semi-risen from his seat and was leaning over the board to bellow at a warrior across the aisle. The second man waved his hands in a calming motion and said something inaudible.
“That is not good enough, by Thor! I wager he will prove his ability before us all tonight!” The ox thumped the table. “And then you will retract your limp assertions.”
“And I wager he will not, not of course because he cannot. I would never imply such a thing,” the second man said in dry but carrying tones.
Others were paying attention now. Isolde noticed heads turning, could practically see the ears pricking.
“What will you wager, Lars?” the oxlike one was demanding. “Your mouth is foul but your silver is fair enough. Here!” He wrenched an arm ring off one hairy arm, waving it about. “I wager Bothvar will give all true men a fine example of how to sow their crops tonight!”
The trestle around them broke into an uproar as warriors, bolstered no doubt by ale, added opinions and bets of their own. Isolde felt the king’s hand stiffen on her shoulder.
“Ja, who throws doubt on our king’s capacities! One fine woman is not enough for his appetite, but he must have another!”
“The queen has not entered her lord’s bedchamber in months now.” Spoken in a low voice.
“How know you this? Besides, who’s to say he don’t give it to her someplace else!”
Guffaws and suggestions of alternative locations.
Even those at the far end of the hall were listening now. The atmosphere had turned curiously tense, and many shot considering glances from king to queen. Isolde could feel the tension invading her blood, seeming to freeze it to sluggish thickness in her veins. Surely nothing would come of this ridiculous wagering? It was just the pastime of men in their cups, something no dignified ruler would take seriously. Unable to stop herself, Isolde sought out Ragnar’s face, seeking some clue.
It was no comfort. He too listened to the ruckus of wagering warriors. His face had a strained look, eyes seeming darker and more fathomless than ever. But he did not move.
Growing more agitated, Isolde swung back to the warriors. More were standing now, and the volume had grown. Snatches of words caught at her ears.
“Wouldn’t be a man if he didn’t.”
“He’s only got one son, after all…”
“I’d do it myself if…”
“There! I wager my lance against the performance of the king’s!”
Amidst it all the queen sat serene in her thick white fur. She did not appear at all disturbed by the deluge of innuendo. Her face was calm and pale as ever, the hint of a smile playing over fine lips. As Isolde watched, Hvíta turned to look directly at Bothvar, wintery eyes boring into his over Isolde’s head. She could not see the king’s expression, but Isolde shrank back against his leg. Hvíta’s meaning was plain. She had thrown a challenge at Bothvar, one he was bound to answer.
“My lord, this is getting out of hand. Would you have me quieten their wagging tongues?”
Ragnar stood behind the king.
“What?” The king hesitated then shook his head. “No…no. It has gone too far.”
Ragnar looked down into Isolde’s upturned face. “You would do as they wish then, my lord?” His voice was quieter than ever.
“Do I have a choice? She is behind this. She will not back down, and so neither can I.”
“What? Before them all? What of…” Ragnar did not finish the sentence.
“No. Not here. In my quarters.”
“Please…” Isolde found her voice at last. They were talking in riddles but she was dreadfully afraid she was beginning to catch their meaning. She looked pleadingly up at Ragnar. Never mind the disgust she had felt for him earlier.
Both men observed her in silence.
“I-I do not want…” She could not make the words come out.
Bothvar squeezed her shoulder. “This is not what I had planned, my dear. But,” he straightened suddenly, seeming to shrug off his years, “I have a kingdom to rule. And men must respect their king.”
Posted by Christina Phillips at 6:00 am