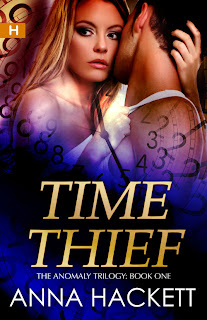 Hunted for her ability to steal time, Bay North lives a life on the run. All she wants is to make the crime lord who slaughtered her family pay. But now he’s set the ultimate hunter on her trail and Bay will need all her skills to carry out her revenge and survive.

Ex-Navy SEAL Sean Archer saw his team killed by a time thief in Afghanistan and came back a broken man. He’s made a dark deal with a criminal to hunt down all time thieves and now Sean’s tracked the wily Bay North to Denver where he plans to rid the world of one more dangerous mutation.

But during a shootout, hunter and hunted find themselves depending on each other for survival. Joining forces to exact payback by stealing a priceless treasure, their reluctant alliance shatters both their defenses. Can Bay find the courage to trust? And can Sean convince a woman honed in revenge that she can have more than vengeance, blood and killing?

The lovely Anna Hackett is celebrating the release of TIME THIEF, and has a fabulous contest for the launch of her first indie pubbed romance.

SPREAD THE WORD CONTEST
Share the cover and blurb of TIME THIEF for the chance to win a $150 Amazon Gift Card. Click here to enter.


How easy is that! Good luck!
Posted by Christina Phillips at 6:00 am