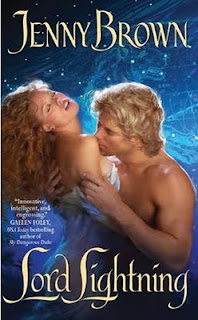 Please welcome my special guest today, the very lovely Jenny Brown! I first found out about Jenny's debut Regency romance, Lord Lightning, over a year ago when I discovered she was a client of my agent :-) I was immediately intrigued because the hero, Edward Neville, Lord Hartwood, is a Leo - my star sign! I was further intrigued when I realised Jenny was writing a series of astrologically theme romances, called Lords of the Seventh House.

Lord Lightning was released from Avon on 28th September and I am so looking forward to reading it.

Jenny, thank you for stopping by today. Can you tell us why the series is called Lords of the Seventh House?

In astrology the "Seventh House" is the term used to describe the sector of the chart that describes a woman's husband and the nature of her committed relationships. In 19th century astrology the "Lord" of a house was the planet that ruled the house and its strength determined how the affairs connected to that house would prosper. I thought the phrase had a nice Regency era ring to it, and of course, everyone loves a lord!

Why did you choose to write romances with an astrological theme?

I didn't actually set out to do this at all, as I'd been told in the past by a very successful agent that it was impossible to sell a book to a mainstream publisher that treated traditional astrology with respect. But the first few chapters of Lord Lightning showed up and demanded that I write them. When I did, I fell in love with the premise that an astrologer's ability to see beneath the surface might free a man who had become trapped by playing a social role that was destroying him. It was my agent who came up with the idea of writing an astrology-themed series and pitched the book that way.

Eliza Farrell, the heroine of Lord Lightning, has a very interesting occupation - especially given the era - that of an astrologer. Can you give us some insights as to her character? What are some of the qualities that attract the hero to her?

My hero, Edward Neville, is a man who has carefully cultivated the reputation for shocking behavior and eccentricity that has earned him his nickname "Lord Lightning," But to some extent the role he has taken on to shock society is an act and Edward cares far too much about other people's opinions of him. Eliza, on the other hand, though superficially prim and proper, is a true eccentric who has the courage to live according to her beliefs no matter what anyone else thinks. Her ability to astonish Edward is what first brings them together, but as the story unfolds the two of them discover they have far more in common.

The hero, Edward Neville, is a renowned rake (and a Leo!) What do you think will make readers fall in love with him?

I hope they'll love his banter and the vulnerability that he struggles, unsuccessfully to hide. I also hope they'll also love his rebelliousness. The characters in most Regency novels seem to me to be for too accepting of social norms that doomed people for making a single youthful error and evaluated behavior entirely in terms of superficial appearances rather than what was really going on. Edward has been a victim of both tendencies and fights back against the hypocrisy of his class in a way I hope readers find refreshing.

When you first started thinking of writing Lord Lightning, who appeared first in your mind, the hero or heroine, and why?

I'd have to say both. The first scene of Lord Lightning which you can read here http://www.harpercollins.com/books/Lord-Lightning-Jenny-Brown/?isbn=9780061976056 came out very close to what you read in the excerpt back when I first sat down to write the book.

What can we expect next from you?

My next novel features a Scorpio hero and heroine. Captain Trevelyan, the hero, is a cavalry officer just returned to London after serving for a decade in India. When he rescues a beautiful pickpocket from arrest, he responds to the sexual invitation she offers in return feeling safe in his belief that he is engaging in nothing more than a pleasant dalliance with a woman who is completely disposable. But he's wrong, and as his connection with the pickpocket draws them both into a web of political intrigue and sexual torment, they will learn how terrifying it is to find a soul mate when you know how dark the secrets are that you keep hidden in your own soul.

"They call him Lord Lightning...for his shocking behavior. An unrepentant rogue with a wicked reputation, his outrageous conduct ensures no woman will get close enough to hurt him.

But demure and lovely astrologer Eliza Farrell casts a chart that tells her Lord Hartwood is capable of great, passionate love. When Hartwood indulges in one of his famous pranks and invites Eliza to become his new mistress, the virginal country miss must meet her fate armed only with her knowledge that the cynical lord will become the tender lover she sees predicted in the stars.

Though Eliza is nothing like the brazen strumpets he prefers, the seemingly incorruptible seer excites Lord Lightning much more than the hard, calculating women he is accustomed to. Eliza's trusting spirit and quick mind touch his cold heart—and when the bewitching innocent surprisingly agrees to be seen on his arm, neither can predict the sparks that fly between them—or resist the electric passion that threatens to transform them both."
Posted by Christina Phillips at 12:25 pm

wow, this sounds like a great book, an interesting series!!!

Oh gosh, I'm a Leo...what an intriguing premise for a book!

Sounds great,
thanks Christina for shining the light on another fantastic series!