Her Vengeful Scot has a new cover! 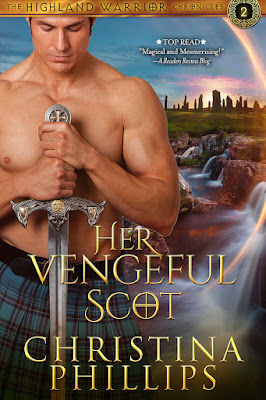 Look at this fabulous cover for Her Vengeful Scot! I'm so in love with it!

For all my wonderful readers who have been asking when I'll be writing more books in this 9th century world of Highland Warriors, I'm delighted to say that the third book will be out in 2021. The heroine is Princess Mairi, but her hero isn't the one I originally imagined for her!

“Magical and Mesmerising   ** TOP READ**
“Christina Phillips once again combines the bloodshed, brutality and political intrigue of ninth century Scotland with lush sensuality and eroticism. This read also contains some of my favourite themes in romance – enemies to lovers and revenge!” 5 Stars, A Readers Review

My enemies will pay for what they’ve done

The only reason Scots warrior Cameron MacNeil agrees to go to Pictland is so he can have vengeance on the Pict noble who killed his sister. He has no intention of falling for anyone, especially not a pagan princess who is married to his enemy. But when fate throws them together, he struggles to contain his attraction.

Caught in a loveless marriage, Elise has no means of escape. But as a fragile friendship forms between her and the tough Scots warrior, she knows if they want to survive this alliance between their people, they must trust each other. As she opens her heart to her taciturn warrior, she imagines a life together, even if it’s an impossible dream. And then her husband turns up dead, releasing her from the vows she’s come to dread.

When danger threatens her life, Cam risks everything to keep her safe from his king’s machinations. He should be happy now his enemy is dead, but guilt cripples him at the secrets he must keep, for if Elise ever discovers the truth, he’ll lose her forever.

But Elise has a secret of her own, one she is blood bound never to reveal. Even if keeping it means she’ll lose the only man she’s ever loved.

Posted by Christina Phillips at 8:26 am