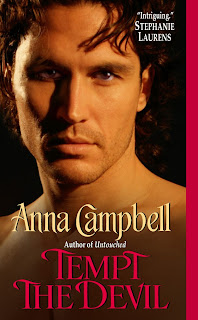 Check out that cover!! An interview, and a hot guy to drool over! *Ahem*

Please welcome my special guest this week, the lovely Anna Campbell who is celebrating her third Avon release this month, Tempt the Devil.

Always a voracious reader, Anna Campbell decided when she was a child that she wanted to be a writer. Her first historical romance for Avon was the multi-award winning CLAIMING THE COURTESAN, followed by another Regency noir, UNTOUCHED, which featured on several ‘best of the year’ lists. Both UNTOUCHED and CLAIMING THE COURTESAN finaled in the 2008 RITA Awards and CLAIMING THE COURTESAN was a finalist in the 2008 Romance Writers of Australia Romantic Book of the Year Award. Her current Avon release is TEMPT THE DEVIL (a Romantic Times Top Pick) which came out in January, 2009. Her work has sold to Germany, Australia, Turkey, Spain, Italy, Russia, Japan and Norway. When she’s not writing passionate, intense stories featuring gorgeous Regency heroes and the women who are their destiny, Anna loves to travel and listen to all kinds of music. She has settled near the sea on the east coast of Australia where she’s losing her battle with an overgrown subtropical garden.

Thanks for joining us today, Anna. Can you tell us a little about your book, Tempt the Devil?

Tempt the Devil is another dark, sexy Regency redemption story. It tells the story of Olivia Raines, London’s most notorious courtesan, and the infamous rake, the Earl of Erith. Erith returns to London to make peace with his estranged family and as is his wont, he takes the most prestigious cyprian as his mistress for the duration of his stay. Little does he know that this decision will result in an overwhelming, passionate love that puts everything he wants at risk.

This story was inspired by the classic film An Affair to Remember. It was my late mother’s favourite film so I watched it a LOT. We only had an old video version I’d taped off TV and I had to zap the ads for Mum. Because I saw it in bits, I started to think about the story beyond the grand romantic sweep which is the most obvious element of the movie. I realised that in many ways these characters could fit perfectly into the Regency. Terry Mackay was a kept woman, in other words a courtesan. Nicky Ferrante was if not a gigolo, certainly a rake. These charming, sophisticated people had set up lives that suited them fine until love came along and knocked them for a six. I liked the way they used wit to keep the world at bay. I liked the way they had very strict personal codes of honour, even if the codes of honour had nothing to do with conventional morality. I liked that they were older and thought they’d lost any chance at a life-changing love. So that was the genesis for Tempt the Devil!

Actually I love sale stories too! I loved them before I was published – they made me think there was hope for me too! I finished my first book, a medieval historical romance, in between high school and university so I time my search for publication from then. 27 long years later, just before Easter in 2006, Claiming the Courtesan went to auction and Avon books bought me. Yay! As you can imagine, there were a lot of false starts, false trails and disappointments over that 27 years. One thing that kept me going was I did OK in writing contests so as a result, I would really encourage people to enter competitions. It’s a great way to get validation from someone who isn’t your mother or your cousin or your best friend and you never know, it might lead to something further down the track. I know a lot of people who sold their first book as a result of a writing competition.

What an inspirational story, Anna, and proof we must never give up when the going gets tough! Well, we're all about the love here, so please share your fave books, movies, TV shows or current fantasy squeeze (it's all in the line of research!)

How long have you got, Christina? Sadly, I’m a bit of a tart when it comes to favourites! One is never enough! I’ve got a list of favourite movies on my website although it does tend to change every week! I’d say right now my favourite movies are Dirty Dancing, Lawrence of Arabia, The Ghost and Mrs. Muir and How to Steal a Million. My favourite TV show would be Spicks and Specks – for those who don’t get Aussie TV, it’s a game show about music and it’s huge fun! I pine the whole time it’s off over the Christmas season. Otherwise I love watching Jeopardy on cable. I seem to be a game show tragic, don’t I? Again, I’ve listed favourite romances on my website but my favourite classic books would be Jane Eyre, Wuthering Heights, Pride and Prejudice, Middlemarch, War and Peace and the Lord Peter Wimsey mysteries. My favourite romances would be the Lymond Chronicles by Dorothy Dunnett (not strictly a romance but wow, what books!), Lord of Scoundrels by Loretta Chase, Flowers from the Storm by Laura Kinsale, A Countess Below Stairs by Eva Ibbotson and A Rose at Midnight by Anne Stuart.

I'm a bit of tart in that way too!! What are you working on now?

I’ve just started another Regency noir set in the 1820s. It’s one of those “oh, what a tangled web we weave when first we practise to deceive” books.

Can't wait! How can readers keep up with your writing and books?

I have a website which I update every month. I pop in every few weeks to add to my author’s page on HarperCollins . I blog with the Romance Bandits and you never know what will happen there. 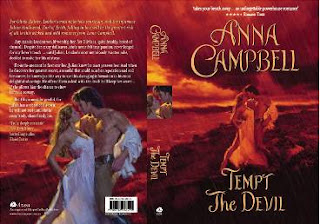 Posted by Christina Phillips at 10:26 am

Hey Anna and Christina! Great blog/interview. Anna, you seem to be popping up everywhere at the moment. I can't wait to read TTD!

Hi Anna,
Love this blogging tour. I love that no matter how many blogs you do there is always something new and interesting. I cannot wait to get my book (To Tempt The Devil)and get to reading. :)I just wanted to stop by and say a few words.

Kirralee, I've been on a world blog tour to promote the launch of TEMPT THE DEVIL. I hope you enjoy TTD!

Carol, thanks for popping by! Always lovely to see you! Hope the book turns up soon!!!!!

Hi Anna and Christina,
Great interview.Tempt The Devil is a really awesome title. I am so glad someone else likes the "golden oldies" movies. An Affair to Remember is one of my all time favourite films, along with Mrs Minerva and Waterloo Bridge.
Regards
Margaret

Hi Anna and Christina!
Great blog! You're really tearing up the cyber boards with this blogging tour, Anna! Brilliant job!
You've really rekindled my interest in An Affair to Remember so I must watch it again - any excuse to sigh over Cary Grant.
Good luck with Tempt the Devil - it's my very favourite Anna Campbell and IMO it will be a smash hit!
:)
Sharon

Yummy cover! I'd grab this one right off the shelf and take it home with me. Ah, "Dirty Dancing", one of my favorites! Have you seen the stage producation? Just as good!

Hi Anna and Christina. This looks like a devilish book to read! And what a great cover. Good luck on your continued success, Anna.

Thanks, Shelley! It's a VERY hot cover, isn't it? In both its incarnations!

Meg, you and my mum would have got on a treat. Those two were way up on her list too. She must have seen Waterloo Bridge 100 times courtesy of Pay TV and cried every time. I must say, it's a bit lugubrious for me but I love an Affair to Remember.

Oh, Margaret, sorry I called you Meg! I've only just got out of bed and I'm completely dopey. I had you mixed up with Meg Leigh from the ARRC loop! I hope you don't feel I was being too familiar ;-)

Hey, Sharon, thanks so much for the plug! I still remember how I was dancing around the house when you came back and said you'd loved that book (Sharon gets to read my stuff in manuscript - obviously she did something BAAAAAAD in a former life, LOL!).

Debra, a Dirty Dancing fan? Yay! I absolutely adore that film. I didn't see the stage show but what's funny is I'm a ballet fan and the guy who played Johnny was definitely on my radar (as a heat-emitting object BIG TIME!).

Thanks, Helen! So glad you're another fan of the cover. He has eyes you could just lose yourself in, doesn't he? Not to mention the sexy little glint!

Thanks for coming by, Kaye! And thanks for the congrats!

Sara, lovely to see you! I hope you enjoy Tempt the Devil. I raked my local KMart yesterday but it wasn't to be found. Clearly Avon ARE holding it back to the release date this time! Untouched was out well before Christmas and it was officially a January release. Oh, well, hopefully RED will be February's colour!

So the old motto "never give up" is true. If you keep at it, it will happen.

Great interview. I enjoyed reading it.

Thanks, CJ! And congratulations on sticking to your guns and making it! Robyn Donald, who writes wonderful intense romance for Harlequin, said something really wise to me once. "The people who fail are the people who give up." It sounds simplistic but it's not!

Anna, all your books have the most gorgeous covers!

Christina, as I said, it was my mum's favourite movie. I think I must have been about eight the first time I watched it. A lot of it, naturally, went over my head, but somehow the story still resonated with me. The cover gods have blessed me, haven't they? ;-)

Actually if you get a chance, An Affair to Remember was a remake of an early (1939, I think) film called Love Affair with Irene Dunne and Charles Boyer. In some ways, I like it even better - it's got a bit more bite to the wit and a bit less sentimentality with things like the kids from the orphanage which is a bit too sugary sweet even for me!

The ghost and Ms. Muir,now that was such a touchy story, and I loved it. :) Ah, it brings back memories.
Lovely Interview, I always love hearing about your novels Anna. I think Claiming the Coutesean was my favourite. but Tempt The Devil, well that is another story. heee :)

If there was a 'Queen of Blogs Award', Anna, you'd get it! Boy, I'm exhausted keeping up with you, but I certainly enjoy getting to know you better with each interview I read :-)

Thanks for putting the interview up, Christina!